It seems like Winter lasted from September to May here but finally signs of warmer weather include baby birdies in nests and concert tickets purchased. Spring occurrences; rituals.

I look forward to following my favorite music to different venues. This year, the band LIVE opens for them. A band I’ve seen a few times that is very much a favorite as well.

I planned on wearing the shirt to the performances; that I often see Adam wear on stage.

Since I’ve been to see them over 50 times I can tell you that he wears this “Velvet Underground and Rico” shirt often. I think the image is based on an Andy Warhol print. In fact I came across an article about this online entitled:

I don’t understand the lawsuit; didn’t even read the article but when I came across a Banana shirt online that was inexpensive I decided to purchase one. The banana ties into my own book title: ” Under the Banana Moon (living, loving, loss and Aspergers/Selective Mutism)” so I was happy when it arrived in the mail. Here it is:

The sizing was said to run small so I ordered way up in size and it does seem to be the case, but happy to have it so I hung it up where it was the first and last thing I saw every day and night. That’s why I’m surprised that a month went by before I noticed this detail: 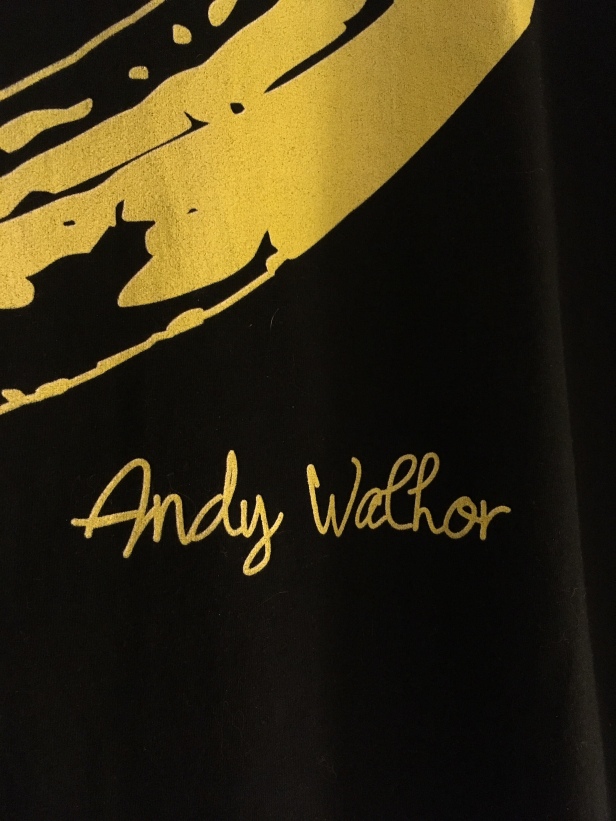 Walhor? Maybe the tee shirt company is protecting itself. Who knows. And I’m ashamed. I am paid to find bugs in software and I didn’t even notice this!

Yesterday was memorable. On the way home from Ruby Tuesday’s restaurant (great salad!) I saw what was a rare sight indeed. I saw a pure white squirrel meandering out of some woods. We were riding by and there it was. Sorry- no picture. I found this one online at Mother Nature Network:

Well, back to Spring and finding birdies as I mentioned.

My “wild rose” as it’s called. The blossoms don’t last long and are past peak here- but they are very sweet smelling.

Al said to me he noticed a bird going in and out of my wild rose bush. A Blue Jay. Thinking the bush to be diseased and running rampant with bugs that surely the bird was attracted to, I decided to peer into the bush for caterpillars and discovered this:

It’s shrewdly hidden amongst thorns, a few feet from the front door. A coworker did a little research and assured me human scent would not cause the mother Blue Jay to abandon nest. And so the wait began.

Days later I saw this on the ground.

I know not why.

But: down to three eggs.

Days later I peeked in again.

Down to two eggs!

I was beginning to worry when one peek revealed a hatched baby and the other one beginning to break free of its egg.

After a few days, my son Silas took a video of the two baby Jays.

The video is impossible to post here but here are some photos.

I give them less than two weeks before they leave the nest. So there you have it. It’s Spring.

Time to look for insects to study. Let me try and post that video after all and see if it works. Here goes.

i think it worked.

I leave you with these pictures.

2 thoughts on “Spring (and then there were two)”