I saw this prettily mosaiced seal at the aquarium yesterday. I wish in retrospect I had noted the artist. These other two pictures (shoes and a bathtub) were on display as part of an authentic Titanic display. These items were found in the wreck site. How weird to touch these artifacts. I’m not sure why the shoes are encased in concrete, as this destroys part of the relic but there you are… 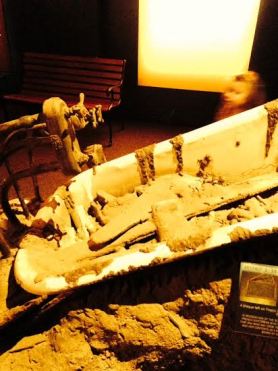 Truly a highlight of yesterday’s aquarium visit was a 4D movie experience (at Mystic Aquarium). What’s that? It’s everything you expect from a 3D movie: the glasses, the falling snow and hurtling objects which seem close enough to touch or to hit you in the nose… But 4 D lent another dimension to the Ice Age squirrel’s antics. “The seats are wet,” said my 8 yr. old grandson as we found a seat. We soon discovered why. Thus the term: 4D. Water sprays at you. There are piney smells when our squirrel finds himself in a forest. The seats rumble and shake when he travels on a time machine. Bubbles and confetti fill the room. Wires move at different times throughout the 40 minute short animation film, gently back and forth across your legs…

There’s more. When the film ended, I expected to see marine life at the aquarium. I didn’t expect to see as much art as I did. The artwork was inspired unfortunately by disturbing things like this: (warning: graphic images easily found online of deformed and/or deceased animals)

Above: This turtle (Peanut,) apparently got into a plastic soda ring (garbage) and couldn’t get out of it. As it grew, the plastic deformed its shell. Turtle with six pack plastic rings around body image found here: http://inhabitat.com/peanut-the-story-behind-the-poor-sea-turtle-deformed-by-a-six-pack-ring/

Above: a deceased bird found with various plastics in its stomach. (image from http://www.dooby.com archives) 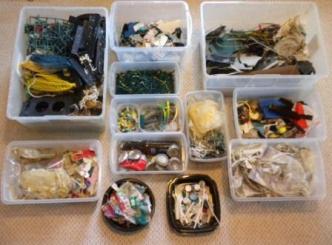 These sorts of atrocities are the reason Mystic Aquarium of Mystic Connecticut decided to display sculptures of sea life made from actual garbage collected from oceans. Here are some pictures I took myself. Enlarge your screen and see the individual items of trash in these sculptures: 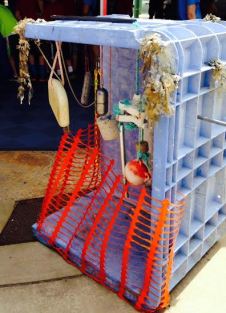 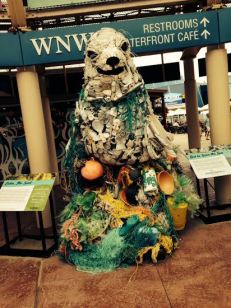 According to the Washed Ashore site, this seal, which greets you at the entrance, is made of combs, shoes, toys, bags, fishing gear, buckets, foam and tons of other flotsam that washed ashore on the Pacific Coast. 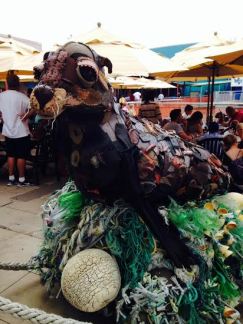 Look closely at the seals. It’ll surprise you to see the types of garbage used to make it. There are flip flops to be found in it! A closeup of the “whale bone” entrance “ribs” shown here include buoys and plastic oil containers.

Isn’t that a cool jellyfish hanging from the ceiling? It makes you think, as it should make you think. It is made, from what I can determine, out of various strips of plastic findings.

This whole collection is part of a traveling display called–

Washed Ashore. (http://www.mysticaquarium.org/animals-and-exhibits/exhibits/1255-washed-ashore) Environmental artist Angela Haseltine Pozzi founded Washed Ashore “Art to Save the Sea” to educate and create awareness of ocean debris and plastic pollution, and its effect on marine life species. Over the past four years, thousands of volunteers have collected over 12 tons of debris for use in this massive project.

What an innovative way to spread awareness. Art tends to do that. There was other art to be found at the aquarium too. I came across this artwork, done by putting paint on the bottoms of a penguin’s feet.

And check out this colorful glass work below by Jeffrey P’an.

(http://www.mysticaquarium.org/videos/behind-the-scenes/809-jeffrey-panglass-blowing)  I apologize for the blurriness. The fish were zipping around pretty fast. Considering an i phone’s picture quality is better than a lot of cameras on the market today, there’s no excuse here! 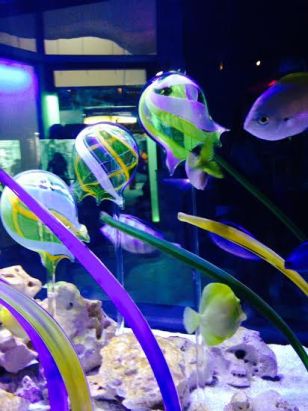 Won’t you take a moment and click over to Connecticut Magazine’s “art on the cover of the magazine” contest? My son has an entry and your votes would truly be appreciated!

Here is the link: http://www.connecticutmag.com/BOCArt2015/Online-Exhibition/  You may have to click the yellow ONLINE SUBMISSIONS box on the right if this link doesn’t take you straight to it.

My son is named Jeremy Tucker. His work is titled “Sunset Sunfish.” You will see three columns when you click on the link above. His particular work is in the third column (on the right) and it is ten images down. After you click the little box under the image, you have to scroll all the way down and find the box which asks: Have you chosen your favorite piece? Submit your vote now!

Thank you for reading. I enjoyed mixing art, awareness and animals at the aquarium yesterday. It was eye opening and fun. Don’t forget to vote for Sunset Sunfish, artist Jeremy Tucker: