The purpose of this blog entry is to post an interview link from years ago. But first bear with me, or skip to the bottom and go right to the link 🙂

I get weird on 11-11 which is today, (as I write this.) It’s a day to celebrate those who have served our country. My partner is forever changed by what he experienced in Turkey for Operation Ｐｒｏｖｉｄｅ Comfort. My father was rendered sterile due to contracting malaria and being airlifted out of a Korean “jungle” as he put it. (I’m adopted.) My heartfelt thanks to all military service men and women. My father:

The hills of Korea behind him.

11-11 is the birthday of the late Artist, free spirit, my online friend Steve Selpal. In the 90s, I was the first autistic person he ever “met” online and he never forgot that. We kept in touch and he was a mentor.

Here is one of the chakras he painted, possibly the last things he ever painted: 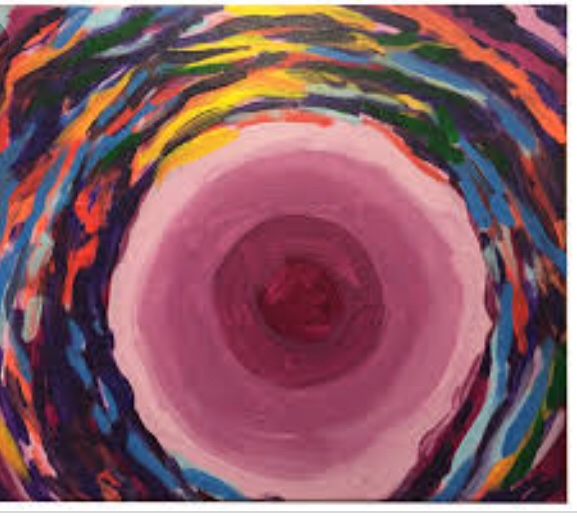 11 has spiritual meaning for many people, and as I mention in my book

, it has spiritual meaning for me too.

So I felt nostalgic this morning when I saw a post about Freddy Mercury’s movie. I was a Queen fan but being autistic I did not always have that attachment to music.

I recall my parents’ idea of music being playing Johnny Cash records and I would jump on their bed (in a hoarder home the bed was surrounded by piles but the bed was clear of stuff) singing along!

It wasn’t until seventh grade that I realized how out of the loop I was. I’d seen Tommy at the movies- a “The Who” rock opera, and my friend and I would reenact the movie bc her mother had the album soundtrack. I played the role of Tommy: deaf, “dumb” and blind kid. This is ironic considering peers would hold up signs to my bus in high school: “Are you deaf? Dumb? Or just stupid?”

But I digress. I’m getting to Donna. So in 7th grade we were given an assignment for art class. She (the art teacher) handed out square sheets of oak tag and we were to recreate music album covers. I was surprised when classmates had no trouble drawing a Led Zeppelin cover or Toys in the Attic (Aerosmith). I’d never heard of these people! I remembered seeing a Star Wars soundtrack album in a store and so I used black magic marker and left pinpoints for stars. Here’s an image I found of the 1970s album online. I seem to remember more stars but this is the inspiration for the boring cover I recreated in class:

Mind you I was a good artist – I enjoyed it so much – but everyone thought my album cover lacked imagination, was too dark and actually boring (right on all counts!) but I didn’t have a clue about what albums looked like. You can’t do something you don’t know about. No googling then.

I set out to change that (my lack of musical savviness) and Queen was the 1st band I really fell for.

How I wish I still had the ticket stub from the New Haven concert I attended. I stood on my chair the whole time.

Bc I was feeling nostalgic I decided to look up that old interview Donna did with me.

Upon a reread, I see I was so superfluous in my descriptions ! but alas, I was just coming down from having written books. So I was in a creative frame of mind. Oh I’m always in that frame of mind.

So here it is:

#DonnaWilliams (#PollySamuels )interviewed me when my book came out in 2012. She was a dear soul. I think of her often. Note: In the interview, the two eye problems I mentioned turned out to be false alarms after 2nd opinion. What a lovely reread for me. I think the interview is dated 2012.

5 thoughts on “KimberlyGerryTucker When Donna Williams interviewed me”