Last year on “autism awareness day”, it was the first time I’d heard of 100s of cake artists, inspired by arts made by autists, making cakes inspired by their paintings.

It’s not a Call-For-submissions thing, so I was surprised to get a tweet (out of the blue so to speak) saying #Enriqe Rojas from #HaveSomeCake, Birmingham England, made a cake inspired by one of my 2006 paintings.

The painting he chose was my Shattered Image Self Portrait which was on the cover of #Art of Autism years ago:

Firstly, I’m going to post some other autist art inspired cakes, before I show you mine.

This artwork is by Stefanie Sacks (no relation to the late Oliver) whom I had a chance to see last year in Boston:

Here is the cake by Laura Peterson:

Here is a cake by Sim Greg. Kevin Hosseini’s painting inspired the cake:

There were many Donna Williams’ art inspired cakes. Here is my favorite that I’ve seen so far, by William Tan of Ipoh Bakeries:

So much talent. I can look at them over and over. Only wish I could have a piece of Enriqe’s!

This is what Enriqe had to say (in part) about the cake he designed around my painting:

“About The Piece and Inspiration:

I was drawn to the Artist Painting initially because of the Colours, the idea behind it and then looking closer into it I realised , for me, it was a reflection of someone on glass. Fragmented. That’s what came to my mind. Not far off from what must be our Brains…

“When I read about Kimberly, I was even more drawn to the piece than before. How Art is , as many of us already know, a form of communication…
“…without the existence of it (autism), we would be without Arts or Sciences.
“…initially drawn into it by the colours, I wanted to transfer that into my piece as well as the fragmentation I initially saw. I hope, as an artistic piece based on the work of another Art, I have made it some justice by creating something inspired on rather than copy it and that I have giving it a new meaning based on the meaning of the original piece.”
It’s interesting to me that he picked out the yellows of my painting as that’s my favorite color: 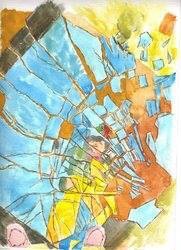 I know those glass shards! I’ve painted them many times. My Shattered Image painting is in the collection of a special education teacher in Connecticut. Many subsequent versions have sold over the years. It’s become my iconic signature I guess.  Enriqe did the shards, those black ones strike me-spot on! I love his interpretation.

I think the blue parts are hard sugar. Not easy to pulling. Like one would find in lollipops? 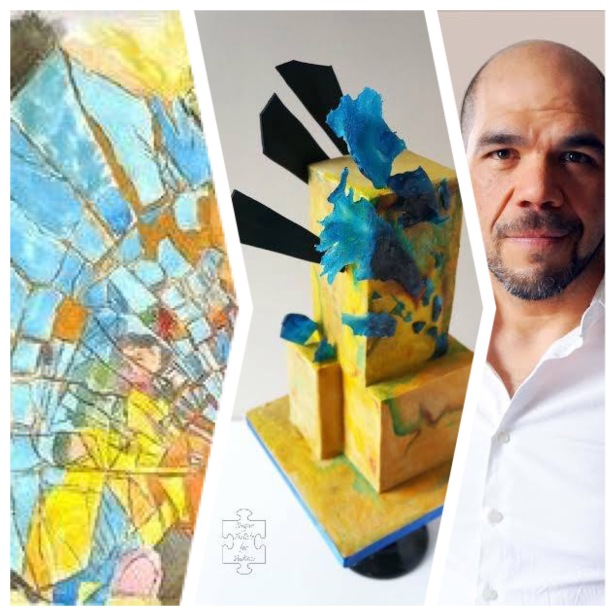 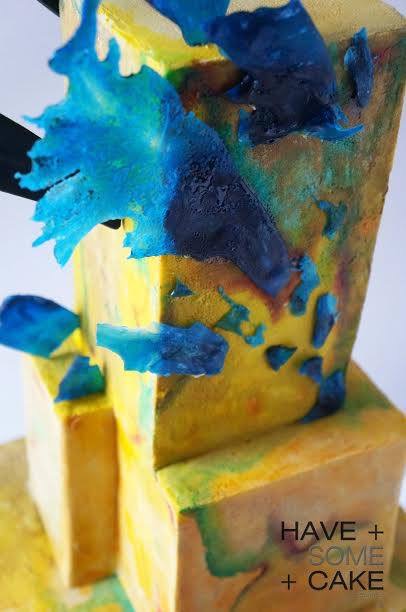