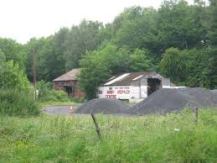 Our memories are like this. A childhood home is torn down and replaced with hot pavement. An empty lot where many late day softball games were enjoyed is stamped out by condominium complexes. “Mom and Pop” stores close the door for good; replaced with new highways where once kids ate pops; and their parents exchanged hellos- and now cars and semis spew toxic fumes into the air. The hungry present eats the wary past like pigweed and cocklebur run amok in blighted urban areas.

This is why writing and art are so important to me.

“What is this contraption?” asks a ten year old who has never seen a phone with a dial.

Van Gogh recorded the plight of the common man; such as he saw their lives played out around him. Potato eating neighbors pale and wan, humble and considered poor, white faced and frail from too many potato meals.

There are certain events in all our lives that are marked forever as something more than ordinary. The brain will bathe life changing memories in cortisol and store them differently than routine doings. With some events in life, I can truly say that there existed the person I was before the event- and then there is the person I became afterward.

One such event seems rather ordinary but is extraordinary in retrospect because it shaped the pattern of my life ever after. You see, I put a checkmark on someone. Not with ink or magic marker, I didn’t put a checkmark on him literally, I just sort of gave him a “tick;” a metaphorical bookmark of sorts.

Years later, he and I were seated at an outdoor concert together and looking up at the sky; a great bowl of stars it was, and he said:

“The moon is an interesting planet.”

I had to smile. Within a year, this person would become my significant other. I am a different person for knowing him. I have listened to his stories of the Middle East where he was stationed. The ancient haunted castles he slept in for fun, the trials of an officer trained in French Commando school… and I also listened to him unpack long ago stored away boxed up memories of a life truly lived.

He would be there with me when my daughter was admitted to a psyche ward several times over the course of a few long turbulent years; he would visit her with me 7 nights a week for long stretches at the adolescent unit. He would be sitting across from me when I spoke on the phone to editors about my book Under The Banana Moon and he would be winking, giving me thumbs up signs. But that is just scratching the surface,

because Al and I have allowed the past to be eaten up in some regards and somewhat eaten up through the telling (as well it should be) but we build new ruts too. I am tentatively writing a second memoir. My friend  Colin once said to me, “Who am I to tell MY story? Who am I tell about such an ordinary life? Well we are all extraordinary. To get through each day is amazing.”

I agree. And somewhere in the west, tumbleweeds regularly cause accidents, particularly in the nighttime. Somewhere, old diaries mould and rot, their words never read. Somewhere little children are in Mandarin immersion programs and are fluent by age 5. The world is an interesting place.

I am writing in earnest and hope by this time next year to have a book in hand.

For now I share with you my latest shenanigans:

Below, you’ll see my packets of seeds. I put them in a bowl to soak overnight, and then planted them in peat pots where they will sprout happily for six weeks, set atop my art supplies table. Then I will put them outside to strengthen the stems and after a few days (probably mid-May) plant them in the earth around the porch where they’ll climb, wind, brighten and delight me. 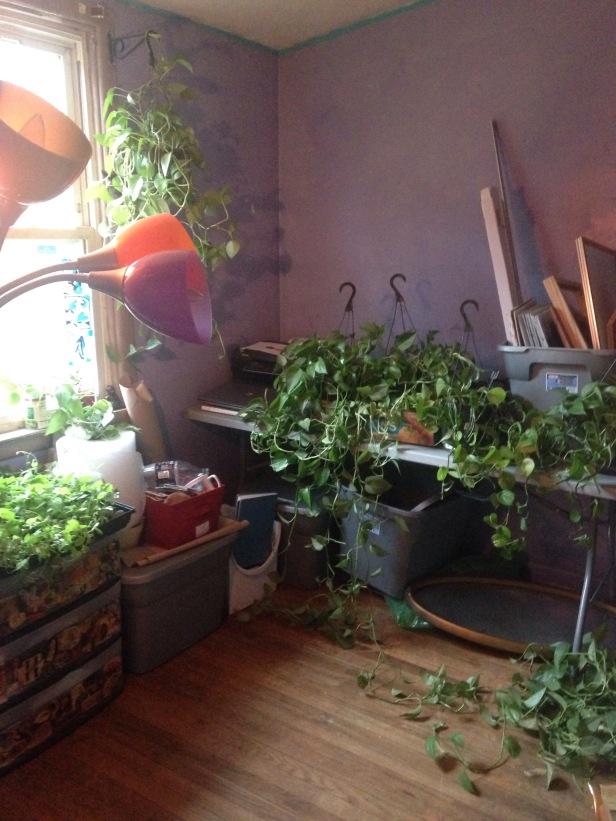 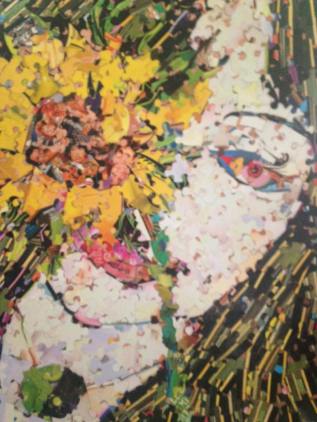 Above is a “puzzle painting” of a woman’s face tilted to the side, a sunflower over her eye and nose, and wearing a yin yang necklace. First I did a drawing on gessoed board. Then I took colors of puzzle pieces that I needed (from various sorted bins) and glued them in place to make a design that you see here. If you look closely you will see that the seeds in the sunflower are little faces that I’ve been collecting from various people themed puzzles.

I’m not putting too much on my plate, right?

Planning a garden, creating artworks, writing a book, and maintaining social media sites including this blog?

Naw, in fact I don’t like to be idle. If I imagine the garden as veggies, the book-in-progress as protein, and the social media as whole grains… then there’s room on my plate for dessert too! This is where the people in my job, the pets in my life, the upcoming month of April (I hope to contribute to in my own way) which celebrates poetry, autism, etc. and my small social circle of people like important online friends… these are the sweet parts of my life. The dessert.  I’d say this:

Bye for now. Send feedback about my blog, art or writing in general, or even about being interviewed by me for a future blog on art/writing/communication impairment at mercurygirl49@gmail.com

2 thoughts on “Back Off Pigweed OR: Just Enough On The Plate”

Adding meaning to the world