I have always been a rescuer. When I was 13, I had this cat named Theresa (tree-sa) (named because I’d climbed a tree to rescue her while out for a bike ride on dirt back-roads). I had way too many animals and knew my mother would say no, so I hid Theresa, her black and white body malnourished; in my bureau drawer for a few hours, checking often to feed and cuddle her and give her reassuring words. But alas, her meowing gave her away. I ended up adding her to my beloved animal menagerie. I can’t even begin to list the cats and dogs I’ve saved from starvation or euthanization.

I remember a cement “shack” of sorts completely surrounded by a chain link fence, at the very end of a heavily wooded dirt road. I happened upon it quite accidentally. When you got within 100 yards, it was apparent what the walls contained because the barking got seriously loud. The fence was set away from the outdoor stalls (enclosed with yet more chain link fence) just far enough so I couldn’t put my fingers through and touch them; which was just as well as some of them looked vicious; probably from neglect and fear. There were small ‘doggie doors,’ always closed that must’ve allowed the animals into the inner part of the building at night to protect them from the elements, I surmised and hoped. Each stall had a few things in common.

Each had a dog and had lots of of poop and stinking urine puddles staining the concrete floor. it could be a matted Shi-tzu, a scabby mixed breed, a poodle with its hair so overgrown it looked sheepish, or a shepherd or what-have-you… All were damaged goods and you could tell. Some were aggressive, stepping in their feces and snapping at the chain link trying to get at your flesh. Some had their tails between their legs and wouldn’t look at you. I’d stand there wondering if those even could bark. In fact maybe they lost the will. I found the phone number to this “pound” or “shelter” and realized they all had a death sentence: euthanization if not adopted within two weeks. I revisited the place often and noticed a trend.

Sometimes people simply tied a dog to the outside fence without bothering to alert anyone they were there. They were tied regardless of weather, and usually with a very short rope so they couldn’t lay down. Always I found them shivering, cowering, eyes either wide, downcast or darting, tail between the legs of course. These dogs would have a look like a kid being singled out in a dodge ball game and pelted with balls, because the dogs inside the enclosure would bark and snarl incessantly at them as they threw their bodies against the fences in their stalls.

I remember I adopted a big mixed breed who was given a name that sort of “casts against type.” She became Princess. She had Shi-tzu markings, but a sheep dog size! Her bushy black and white hair grew fast and needed my attentiveness to keep it out of her eyes. Princess was the saddest dog I’ve ever had. She moped all the time and NEVER barked. Over the years I must’ve welcomed into my home almost a dozen dogs, that’s not counting cats I found here and there. Sure some dogs had problems: old age related ailments, cataracts and near blindness, even one with a tendency to nip and another with seizures. Each one felt like family. To bathe an animal who has been stepping in feces and is anemic from being eaten by fleas is to restore dignity. You can see the blood from all the bites, wash down the drain and you re-lather. Then lather yet again. You finish with a cream rinse. You are aware that the physical healing will take awhile and you commit because you already love them. You see a glimmer in their eyes. You get out the clippers and groom an animal who has become so matted that they cannot poop without it getting stuck in the hair. It’s a better feeling than seeing those ”before and after” makeovers that ladies get on TV shows. Really the before-and-afters were dramatic. They looked like different dogs and usually, except for forlorn Princess, got back a bounce in their run and a chipperness in their barking voices.

Sometimes I feel like my goal these days is simply to lead a hand-to-mouth existence. In fact I feel like a rescued animal myself when I think of how many people have come into my life exactly when I needed them and given me unconditional care and even love, financial help, sustenance, and hope. To all of you thank you. I am never a finished person, I’m always in the making. One thing I know, as I move forward there are many ghost animals who protect, guide and follow me. There’s Princess, Chotchey, Bambi, Prince, Pepper, Kitty, Lucky, Suzy, Pralph, Puff, Theresa, Cleo, Pistol, Blackie, Duchess, Jeremiah, Cindy-Sue, Dum-Dum, Sweet-Pea, Max, Sam, Lucky II…and so many more. Out of those mentioned, 17 were rescues. Seriously though, they rescued me.

Good old Mister Po, my current kitty. He was brought to my attention by a neighbor in 2002 who saw a stray (feral) mother cat abandon two kittens so young they were nearly hairless, on her front porch. To my neighbor’s horror, she saw a hawk snatch up one kitten and fly off with it. If I hadn’t taken Po in, he would’ve been a goner. He was so floppy and tiny that his wee head, not unlike a baby bird’s, lolled on his teeny neck. I nursed him with a baby bottle and miraculously he grew. When my dying husband had a feeding tube put in, I used dribbles and drops from his highly nutritional Boost drinks to supplement Po’s diet. He got his shots at the vet and thrived. Today he has a beautiful long-haired coat and is a sweetheart. 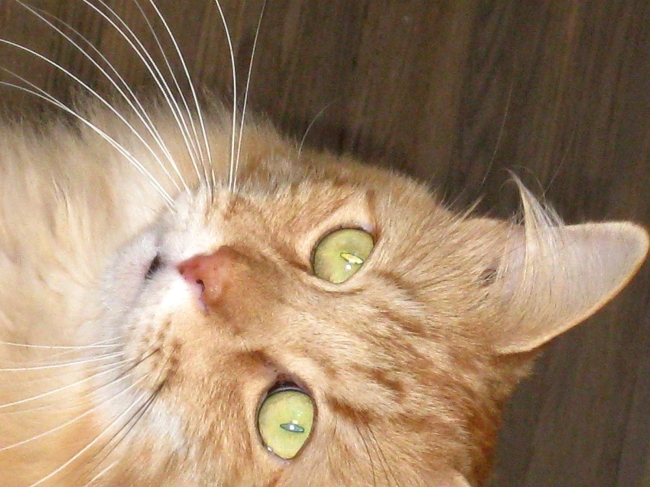