I don’t understand it. Am I taking the weight of the woeful world’s troubles on and internalizing it? Lately I’ve had trouble seeing the positive side of things. I won’t mention the bullying, cruelty and atrocious acts I’m referring to here, but you have access to media; you know what I mean. Even if I were to avoid watching the news I wouldn’t be immune to the horrors that go on. It seeps my way. I wouldn’t be human if it didn’t get to me, right? Well, these aren’t humans committing these unthinkable acts, these are inhumane people.

Did you ever flip through the TV channels and pause at the wildlife channel? Ah, the beauty of the solitary moose with its slow moving bulk (unless startled) and its majestic antlers! That’s a calming sight, like a session of meditation or chamomile tea for the soul. That will calm the hopelessness, I think. But sure enough my mind wanders. I’m stuck in “negativity mode” so I’m reminded:

That moose could be anemic. It could be literally having the lifeblood sucked out of it by over 80,000 ticks at any given time…No wonder populations are declining.

I sigh and flip the channel. Ever watch Lt. Kenda, Homicide Hunter? I love to see the ‘bad guy’ get what’s coming to them. I guess you have to develop a hard shell to deal with murder. As Kenda said on a recent program:

“You ask me if I have any sympathy? Go look up ‘sympathy’ in the dictionary. You’ll find it between ‘shit’ and ‘syphylis.'”

Being who I am, I naturally had to look that up in my old red coverless battered pre-computer archaic dictionary.  I found that while the word sympathy truly does appear between the above two words alphabetically (Kenda is right) it doesn’t appear in the dictionary precisely between shit and syphilis. But that didn’t ruin my enjoyment of his one-liner. I like his attitude. I’ve got a shell too.

So the imagist is back to seeking out what brings me peace, like trees. But I look at trees and I see misshapen claw hands drawing back from the roadsides where treecutters have lopped and chopped and hacked. I get up close and I see mold on the bark, bugs eating them up from the inside out.

Where did Pollyanna go? Where’s my ”Goldilocks zone?” That comfy place I occupy in space that isn’t too hot or too cold? Or too tragic, or too unbearable, too mean, too much to bear?

From an unknown author, a limerick about limericks:

“Writing a Limerick’s absurd,
Line one and line five rhyme in word,
And just as you’ve reckoned
They rhyme with the second;
The fourth line must rhyme with the third.”

The hopelessness lifts, just a little so I have to look a little more.

I found these amusing photos on floorsix blogspot… Can you guess what they are? Answers at end of blog

I recall perseverations I’ve had in the past. I was once fascinated with everything to do with dust. Still am, actually. Currently my pet topics are the brain, DNA, and of course art. Not in any particular order. I also like taking close up photos so I’m inspired to take some, having perused the floor six blog…

Okay so the fog is lifting a little. I’m compartmentalizing negative thoughts and urging the positive to come forward. Here’s a way to turn the mundane into the awe inspiring:

(It’s a pile of logs, by Gary Tallman, what a cool name.)

There IS magic in the mundane!

My team of specialists are pretty sure I have Lupus. It’s kicking my ass.

Crazy, isn’t it? What the body does when you least expect it? Like these Gore-Embellished Porcelain Figurines by Jessica Harrison:

Until he was admitted to a nursing home in 2000, William Utermohlen painted regular portraits of himself during those first years of his diagnosis. What we see is a man struggling to remain in touch with the world around him. Utermohlen passed away in 2007, but his self portraits have lived on as a way for us to understand the devastation of Alzheimer’s. A self-portrait of William Utermohlen from 1961: 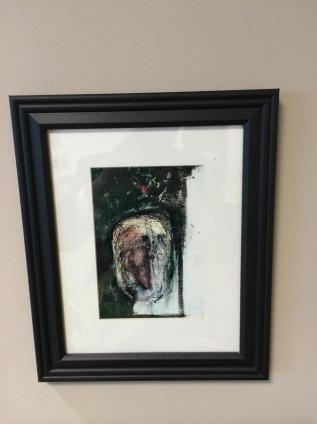 Aren’t we all works in progress?

I feel better now. Thank you for listening. Really, if sympathy falls between shit and sympathy in the dictionary, then hope lies somewhere between hell and hopelessness. Get your Lt. Kenda mug here: (already ordered mine) http://store.discovery.com/detail.php?p=597658&ecid=5511&pa=CSE-FGL&CAWELAID=120015730000020876&catargetid=120015730000016992&cadevice=c&gclid=Cj0KEQjws8qgBRCLp-aploLbqcQBEiQAm0rD56TAQ-zIOfE6_43viHta_YWEX2TNJ7ghcGy2iD4ZqZgaAkFR8P8HAQ

FURTHER READING ON THESE SUBJECTS:

For more “Guess what these close-ups are,’ check out the website: http://floorsix.blogspot.com/

Here is a great blog about intelligence, compassion and communication that I find positive and inspiring:  http://emmashopebook.com/

Man with alzheimer’s draws himself for several years:  http://www.viralnova.com/alzheimersself-portraits/

Answers to above close up photos: First photo is a soda lid. Second photo: torx screwdriver