“Guess I have to kill you now”, I joked during our ‘bathroom time’. He rolled his eyes and had this stern face which was his mask, the ‘mask of ALS’ (Lou Gehirgs) as it was called in the newsletter we got delivered to the house. His facial muscles were so weak that he had a set ‘expression’ which didn’t change anymore. He had once told me “Kill me if you ever have to wipe my ass.” Well, that time had come! 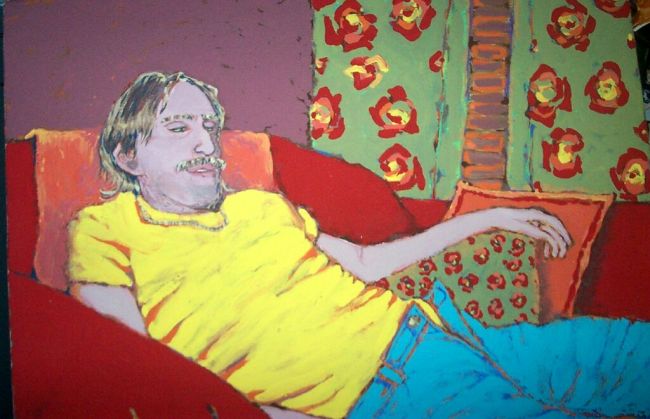 He was wobbly, never walked anymore, but so far he could still stand to pee. I was getting real good at hoisting, pivoting, lifting, running the power chair. His hands were limp, and claw-like. Frozen. I could stretch his arms and legs; trying to ease the stiff joints and muscle cramps brought on from lack of use. But the fingers, they could not be stretched out. (He had exactly two more years on earth left. That is what the docs said and they would turn out to be right.) At night the breathing machine inhaled noisily and exhaled liked like a macabre Vincent Price film and I had unspeakable night terrors. As for him, since he was paralyzed, it was good that I woke up often so I could shift his position. Because whatever position I put him in, he would be waking up 5am sharp for the day in exactly the same position if I didn’t move an arm, a leg…

Before bedding down, he’d ask me to straighten the fingers on his hands, and I’d try. He’d wince in pain but urge me on. He thought if I taped them to a block they would remain straight! We’d “fix ’em.” Ah how futile! I dutifully followed his instructions to flatten and straighten the fingers and tape them down to a flat piece of wood, a child’s block. He slept all night that way and in the morning when I removed the tape, those fingers were already curled right back up like question marks, somehow having done so even under the restraint of the duct tape as he slept. I did this experiment several times because it didn’t “work the first time,” and I didn’t have the sarcasm to say, Told you so…a neurological disease is a neurological disease. You are at its mercy. But I thought this, and the pain on his face bore into me. I did tell him with wet eyes, “I would poke out my eye with a needle if that could make you well.” Looking at his traitor hands, where I’d arranged them on his chair arms, he nodded, believing I would.

There are things I did during his care that sustained me. Oh, it was a busy house…Three of my children, one child’s fiance, doctors, the occasional physical therapist. Visitors. I did mosaics. I read books when I could. His illness lasted from 2000 to 2005. In 2003 I read the (true) memoir: “Running With Scissors.” The book is more than a cosmos of cockroaches, dysfunction, Christmas trees left up year-round, and dysfunction. This book made me feel when I was numb. It made me laugh when I was in the muck. It took me sailing out of my own terror and into Augusten Burrough’s topsy turvy circus-like life. I remember not getting along with my son’s girlfriend at the time. Tensions were high. I lent her the book. You see, once again we weren’t speaking. I saw her across the room, reading, tight-lipped; when suddenly she burst into this staccato laugh so sudden she clamped a hand over her mouth. I grinned. I saw a laughter-tear slip over her cheek. The next time I saw her reading she was sobbing. 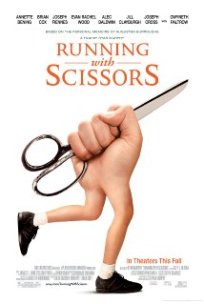 In 2006, a year after the funeral, she and I went to see the film Running With Scissors (which doesn’t do the book justice…but it does allow us a cameo of the real Augusten at the end…incidentally his brother John Elder Robison, an autistic man, has achieved bestselling fame with his books too.) Augusten’s book had made both me and my future daughter in law cry. It came to us when we needed to feel sad for someone else and not sad for ourselves. And elated too. We rooted for Augusten. It brought us together. We were angry at some of the people in his crazy unbelievable life and the book made us laugh so loud it startled us because laughter does that when you’re in a room by yourself and you laugh like that with no one but your own self to hear it. It’s kind of healing, really.

It’s been 8 years now since the funeral. My son broke up with that young woman. The only daughter remaining at home now is 18. The thing is, I came across a video of my husband and I watched it and it had a strange effect on me. I started crying every day. I’m not one to give in to depression so I began to panic. I refuse to take meds because they mess with my creativity. You know the Buddhist philosophy, ‘if you’re anxious then you’re living in the future, if you’re depressed then you’re living in the past so dabgummit be peaceful and live in the present…’ or something like that…and it’s true. I’ve written about all the past, it’s over. My art, my curiosity about the world, this is what moves me forward. To be in the present completely, that is always my mantra.

So what the hell happened to me these past few weeks?

I’ve been having a pity party, folks. There’s this attractive 30-ish young woman I know. She’s always saying, “I hate my looks. I hate my face…” All women are insecure. I’ve come to believe that. I’ve never known her to be anything other than physically fit, even after a couple kids. She’s had a good education and has got a few vacations planned with and without the kids including one to “The Islands” this year. I remarked she was a “lucky” woman. Boy did she ream me out! Her words—“I hate when people call me lucky!!!! Sorry for sounding rude but I worked my ass off damned hard for this!”That’s what she said to me

I then felt like a writer who couldn’t choose words properly. Sounds like she needed recognition from key people in her life, needed to feel appreciated. That chip’s going to fall off and kill someone. By lucky I meant that my genes aren’t so kind. I meant that my kids were used to vacations every year too when they were small but ALS cut that short for them and now I juggle 6 different ways to bring in income just to stay afloat. 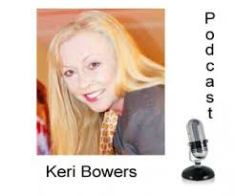 I called out: “I know this answer….It’s ‘Running With Scissors!’ And I’m connected to it through Keri Bowers…” I then turned to my significant other and said, “It was not as good a film as it was a book but I’m connected to the book.” 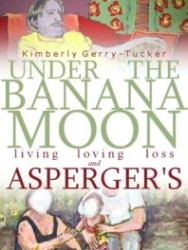 When I finally got my book Under The Banana Moon published (with an interested agent, no less) there were people who read early drafts, and one of those people who read the book and wrote a blurb was Keri Bowers. Keri, who was a former paralegal in West Hollywood working with such bands, musicians, and celebrities as Motley Crue, KISS, Blind Melon, Graham Nash, Pamela Anderson, and many others, knew she wanted to steer her career in the direction of disabilities awareness and advocacy. She became an autism advocate, inspirational speaker, author, seminar leader and friend. She read my book and went on to say that MY book reminded her of her then favorite author AUGUSTEN BURROUGHS of Running With Scissors fame. Can you imagine me, after many late night/early morning writing sessions staring at an over-bright computer screen only to have that review come back to me from such a spiritually beautiful lady in the autistic community? Especially since Keri had no idea what Augusten’s book meant to me personally. And there she was, comparing MY writing to HIS, out of the blue. Keri and I met in Hartford, and in New Haven where she did a docu-film called ARTS and I appear in that film, albeit for a short interview. She may officiate my wedding ceremony one day, but I digress.

Now you may have never heard of Keri or Augusten. In fact, my significant other said, “Running With Scissors? Never heard of it.” But, you know what? Something clicked when I answered the Jeopardy question. Augusten’s life was once such a dysfunctional unbelievable mess and he wrote a brilliant book that came to me during a bad time and transported me in a transcendent way. Then he’s suddenly the correct response on Jeopardy. I know it’s a little thing, just a chink really, but if my writing truly is like his, like Keri says, then maybe just maybe I gave someone that experience when they needed it. Maybe they read Under The Banana Moon because they needed to. Back to the present. Back to being curious about the world because that’s how I prefer to live. Enough tears already.

Take the Egyptians for instance.

Kimberly Gerry Tucker- author of Under The Banana Moon

Afterthoughts: this blog isn’t meant to minimize clinical depression, which someone can’t “snap out out of”…
Also, I’d like to state that having my words heard is especially important because, as an autistic person, so often so much goes unexpressed .