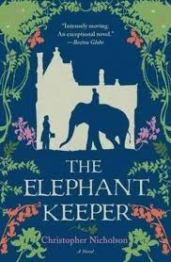 I rarely write a book review but The Elephant Keeper screams to be understood, and to be read. If you do read it, you may come away from it stuck in your head but not able to really understand what just happened. Doesn’t that have the makings of a good read? One that makes you think a little? I cannot give away the ending so I’ll do my best here…

The setting is the latter half of the 1700s in England. Imagine two elephants, of all things, coming over on a ship from the East Indies. Most people had only heard about them and could scarcely believe their eyes. A wealthy merchant buys the sickly elephants but as the elephants move from master to master, it’s clear the real owner of these animals is the elephant “groom” Tom Page. He becomes what we would term today an “elephant whisperer.” His bond not only teaches us how intelligent and communicative elephants can be, but as the story unfolds, the latter part of the book sort of spirals into chaos.

No one truly knows how to medically treat human ailments, such as gout (a nobleman spreads dead viper skin across the affected toe) but their ideas for treating animals are a bit backward too. A common practice was “bleeding” the animal, and thereby losing a pint of blood or so, the impurities would be bled out.

A lot of people may cringe at the way animals were treated then and indeed the “man’s role” in society…But it’s anything if not insightful and painstakingly honest. Tom is as human, with all the frailties that come with humanness, as Jenny the elephant is elephant. Yet somehow they cross over in a human/elephant bond that is a joy to read, especially in the first section of the book.

If you see Tom Hardy in this book it’s because the author, a BBC radio documentary producer Chris Nicholson happens to admire that author’s work, and it shows. A lot of research has clearly been done for this book and like the book or not, it’s hard to shake. He captures the essence of 1700s London with unflinching honesty and a whole lot of grit. I especially like when a rat falls through the ceiling onto Tom’s body, and crawls away… “Why good morning, madam!” he says.

The ending was unexpected and yet expected too. It didn’t sit well with me and yet it ended perhaps as it should have. Give it a read and let me know your impressions. Personally, I have a family friend who considers me a mother figure, and every year he gives me an elephant for Christmas. I’ve never asked him why, as I never collected them. (I do now…) But now they have new meaning. Elephants are much more than any of us can even imagine.

Look up this book on amazon! author Christopher Nicholson