Some years ago I was wondering whether or not I should be a tattoo artist. Sounds fulfilling and fun. But then I got to thinking, what about all the small talk involved and touching of other people? Not really my thing. I mean if it were possible to tell customers: ” Okay, leave your skin there on the counter and I’ll have the tattoo finished by tomorrow!” But alas, that’s not going to happen.

That same year that I was pondering the tattoo profession, I got a small job doing murals on a couple walls inside the entrance of a day center for disabled adults. The adults were for the most part in wheelchairs and a lot of them pushed themselves around the place, but some wandered the halls. Few were verbal. Most had CP, MR, or both.

In a preliminary interview, one of the staff asked me to do a wall-size version of Van Gogh’s Starry Night. I was so revved to start something so pretty and special…but the supervisor shot that idea down. I was hired to paint rural scenery (deer, barn, train, pond, birds, etc. and when I suggested the idea of incorporating some of the residents into the scene (such as one young man doing a ‘wheelie’ in his chair), the idea was met enthusiastically and the people I chose as subjects supplied me with reference photos and signed releases.

Now I don’t especially enjoy being watched while I paint. Some of the staff would sashay over to stare at my progress, make encouraging remarks, ask questions and the like…and I would freeze, paintbrush in hand-the deer in headlights, me. People pulled up behind me like cars as I tried to paint. I imagined them screeching to a halt, I heard them idling, smelled them, could feel their headlight eyes glaring into me and I froze as I said, like a deer -my mind goes so fast: RUN RUN instead of PAINT PAINT.

It almost entirely ruined my concentration, really. The onlookers…

I had a frequent visitor who always seemed to know when I was arriving and waited for me by the big picture window that was behind me when I faced my mural. He appeared to be middle aged, with unruly black hair, a mischievous grin, and a shuffling gait. He slowly dragged one leg to the side when he walked. He said single words; uttered loud and with passion but I couldn’t understand them. He would shake my hand every time we greeted (quite vigorously!) Sometimes he gave my back a quick soft tap while I painted. He was very gentle; always smiling.

I would stand on a stool to reach where the ceiling met the wall. And from the very first day onward: THWUMP! A little rubber ball bounced off my head. I turned. It was a young man who was beginning what would be a week long ritual in riding up to me in his chair and watching me. I greeted him, even though he could not greet me back. I didn’t mind him watching me at all. No small talk or critics with this guy-like the staff.  I got down, picked up the ball and handed it to him. This went on every day. I’d try to include him in what I was doing, between getting down to throw him back the ball and painting.

“Do I have enough clouds here? How does it look?”

Whenever I looked his way he’d giggle behind his hand.

Around the seventh day, I’d been distracted with my masking tape that I’d lain across the ceiling edge to protect it. I hadn’t heard him approaching and didn’t react to the ball right away. I wanted to get the tape down first. Next thing I knew he’d risen a foot out of his chair; with his hands on his rails and he had actually given me a head butt right on my leg!

I got down right away and apologized for not having said hello. We had a game of ‘throw the ball at each other’ for a few minutes and I returned to the mural work. The next day a staff member appeared and whisked him away ball and all.

“Is he not supposed to watch me?” I asked. “He’s no bother at all. The paints are out of reach and there aren’t any barricades in the hall…”

I thought, if they don’t want him here then close the door to the day room. I most certainly didn’t tell her about the day my ball-throwing-friend took off like a speed racer with a stolen paint brush in hand (he giggled the whole while, even when I took it back) and I most assuredly didn’t tell her I’d been head butted.

“He’s not allowed alone with you…” she said. Then she steered him away. He was not grinning. In fact his face contorted as if he were about to melt down. The staff lady went on to tell me that he could never be alone with me again…Only the staff was trained to handle him…A male worker came to assist the woman in relocating him to the day room and proceeded to tell me the man was a “violent individual.”

Back at home that evening I wondered about a lot of things.

I ended up watching The Outsiders on video because my daughter read the book so the movie was a bonus for her. She wasn’t disappointed.

On the subject of Coppola, I once got a handwritten rejection letter from Coppola’s Zoetrope magazine. I still have it. He said I “developed my characters quickly, efficiently, nicely, smoothly.” But I didn’t fit with the magazine.  Nice rejection letter as far as they go, especially since it’s handwritten. It’s initialed F. and I like to think it’s from Francis Ford Coppola personally. Seeing old films…

The Glass Menagerie is a particular favorite. I remember I watched it at some point during the months painting those murals (I did two walls). In Glass Menagerie a guy calls a girl “Blue Roses.” He gives her that nickname…but actually what she has is a neurosis. You see, he’d overheard someone discussing the girl’s Neurosis but he mistakenly heard Blue Roses. Something about that appealed to the artist in me (and the neurotic too!)

One night walking downtown in the dark I thought I smelled some very sweet smelling grapes but I couldn’t find the source. The smell reminded me of wisteria- which is strong; sort of sandy, musky and sagey with a honey undernote.

You think such things while walking in a light rain. 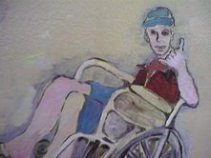