We have always lived in a world where the possibility exists that goat manure piles (of poop) can spontaneously combust. It happens, spreading fire and amusement and stench. I bring this up because I don’t fully understand the scientific aspects of spontaneous combustion, suffice to say heat and methane probably play a part but I know for sure it’s random and it exists. There are times that life hits me like a surprise heap of burning poop. I don’t always handle that well, I admit.

I can remember always having to rein in my powerful feelings before they became like runaway things; bolting away; leaving me jostled jarred and unsettled. I’ve always had to never lose sight of the obstacles ahead while trying simultaneously to regain my balance, check my surroundings and reevaluate my situation before I toppled into a crumpled heap. Sometimes even having a hell bent optimistic vigilance toward keeping abreast of all the stumbling blocks and booby traps in my path and in my head, and mulling over ways to resolve them, I landed head first anyway. And you know it when you CRASH! It’s somehow always surprising. I continually work on reminding myself that a negative mindset can destroy my immune system. If I keep saying “This is killing me,” I’m sure my body tries to make good on that. The brain and body are connected strongly with might and with main. My feelings go grievously amok sometimes but I’m the driver. But-

if chaotic randomness has another side to it, maybe hope is its B side?

Hey, ‘if you’ve done the same thing over and get the same result, dare to do something different.’ That’s what “they” say, right?

Who is they, anyway?

Why should we assume “they” know-it-all? (rhetorical)

When we yearn for change, we need to carefully observe people who use uncommon but successful strategies that effect that change. There are people whose unconventional but successful behaviors or methods enable them to find better solutions to a problem than their peers, despite facing similar challenges and having no extra resources or knowledge than their peers. These individuals are referred to as “positive deviants.”

note to self, To-Do list: Be a positive deviant!

I get a lot of my “inspiration” (to keep a firm grasp on the reins) from my dog and from music. I often think, what if humans had originated from canines instead of simians (apes)? Wow, it’s possible we’d still walk as upright beings…but would we have no speech? Would we instead rely on our keen amazing sense of smell and simply “read” body language and tones of voice to ascertain the mental states of others? My dog certainly does that.

Asleep in perfect blue buildings
Beside the green apple sea
Gonna get me a little oblivion, baby
Try to keep myself away from me (myself and) me–

All lyrics, from the kitschy mindworms that get stuck in your head, to the everlasting classics- have something in common. They started as a few jotted words. Scribbled notes. Word doodles. Pieces of ideas and thoughts. Someone thought enough of a few disjointed words and phrases that they didn’t minimalize the randomness that came to them; considering instead that just maybe they meant something. Inspiration is everywhere when our senses are fully engaged; we can’t dismiss its power or look the other way. I like to believe that there are people who believe in doing at least one act of random act of kindness a day for a stranger, friend, acquaintance or loved one. Just reminding oneself of that is inspiration. 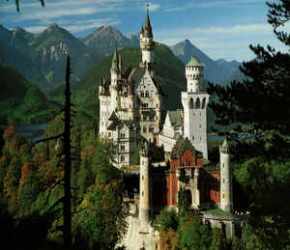 So many things we take for granted were inspired by something. How many people know or even care that Neuschwanstein Castle (the most photographed building in Germany and candidate for one of the ‘wonders of the world’ as seen above) was the inspiration for Sleeping Beauty Castle at Disneyland Park? We take a lot of things for granted and it feels like the Disney castle has always been ‘the castle.’ But there is inspiration behind almost everything in this world. Few things are as random as exploding poop. The ‘princesses’ have always been a part of Disney. But not really. Most of them are inspired by fairy tales. Not the kind with Disney endings, but rather borrowed from Grimms’ deliciously gory grisly tales. Disney has been inspired by Shakespeare too (The Lion King) and numerous other sources…

I suppose while navigating the age-old obstacle course of existence, I may actually encounter burning stinking exploded goat poop, but  I will be scanning the roadsides for Queen Anne’s Lace. Why give the poop negative attention? That’s what it wants. Don’t buy into it!

(Note:I assume the photo above is public domain, if that is not the case, please contact me)