There’s a stew abrew. And by that I mean, if my life were one flavor, I’d be pretty unfulfilled. A stew with all meat, is just… lacking. So here’s a catch-up of the bits and bobs that have flavored my world lately. Al, my significant other, with our new grandbaby Winry (she is named after Winry Rockbell).

She is so tiny, my son recently dressed her in his beloved ape’s outfit, ape seen here with Squiddy– and the tux fit perfectly on Winry! No, I don’t have a picture, but it was priceless.

I like the contrast in scale here, between Al’s thumb and Winry’s little fist. 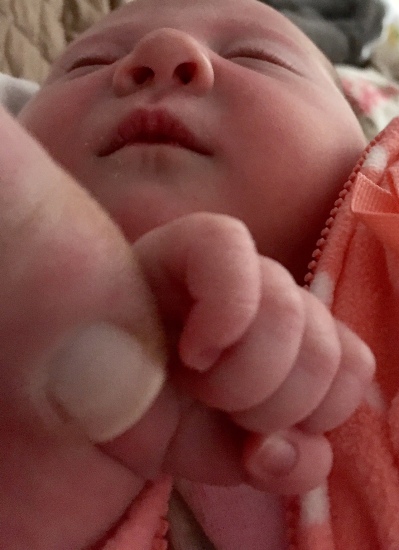 Here I am in the hospital the first time I held her –she is the spitting image of her mother❤ . 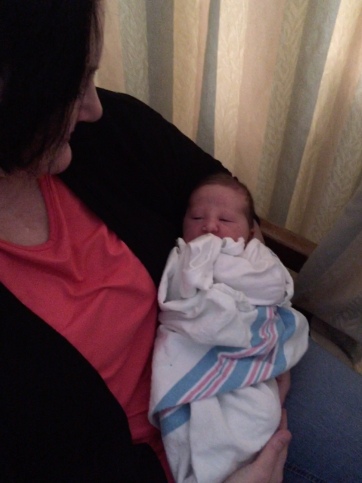 Here is a waste bin outside the hospital. Note the sticker. 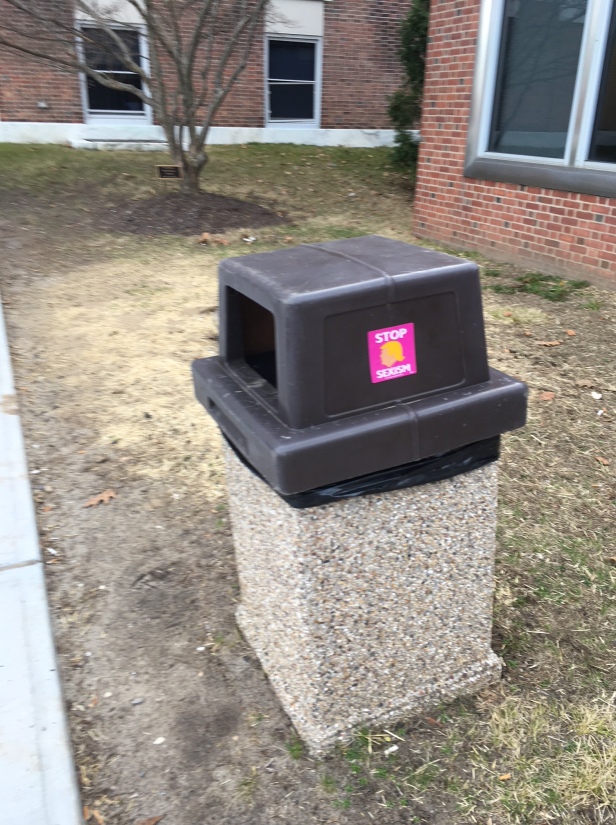 I’ve been trying to work on my faery villages outside in the yard. A dear friend gave me a little gnome rowing a boat for Christmas, and I decided to make a water feature for him to row his boat in. Here was my process. I started with an ordinary piece of plastic (it’s got to be fairly waterproof because it is meant for outdoors and I am using tissue paper, which could grow mold.)

Even when I do my art collages, I tend to use recycled things, things I’d normally throw away, that I repurpose. This plastic, seen here is from a new table cloth I bought for Easter.

I started gluing various colors of tissue paper over the rectangular strip of plastic, for the “color of water.” I know that most water, particularly on ponds, is not truly blue, but I am not going for realism here. I wadded up the tissue before applying it, for a textural effect. 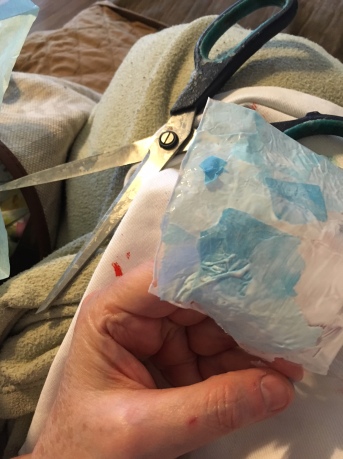 At first I thought I’d cut out pictures of fish from books and glue those to the plastic, but I decided to simply indicate “rocks” below the surface of the water instead. So I cut out shapes of rocks, using the black areas of text from this Tostitos bag, and glued them to the underside.

This is how said rocks look, glued under the tissue paper, with the black side facing the tissue. I used ‘dark’ paper from sources other than the Tostitos package too, for variation. 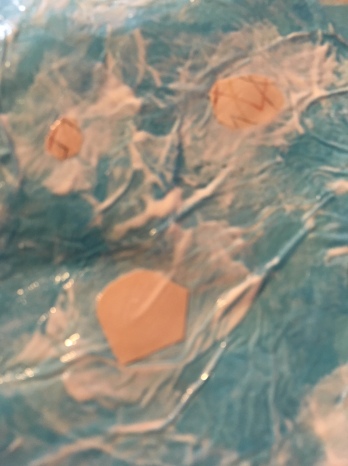 This is how it was beginning to look on the underside, with the Tostitos rocks glued, and an entire new layer of yellow tissue paper over the shades of blue and white tissue I also had on there. When I flip it over (not pictured) then the top is plastic and therefore fairly waterproof to protect it from rain. The yellow blends with blue, giving a green effect.

But I realized I just couldn’t place this directly on dirt, because the underside is paper and glue and would deteriorate. So I put some glue onto a piece of cardboard…..

…and smoothed out the glue, affixing it to the back where the tissue is. I then protected the cardboard backing with a thorough layer of good strong see-through packing tape. Now I was ready to put it outside, and from the pictures here, I hope you get the general ‘idea’ of ‘water feature!’

The rocks glued underneath (from the Tostitos) don’t show through very much. I’ve learned they should’ve come first, before the first blue tissue layer. But they do show through a little. I surrounded the ‘pond’ with moss, bark, and rocks.

The black spikes you see have Butterflies on the end of them, but the butterflies you can’t see from the picture- they are out of frame.

In this picture, you can see a little bit of wing from a plastic butterfly. It’s not a perfect water feature, but I like it. Here is more of what I’ve done so far, very early in the work I’ve yet to do. 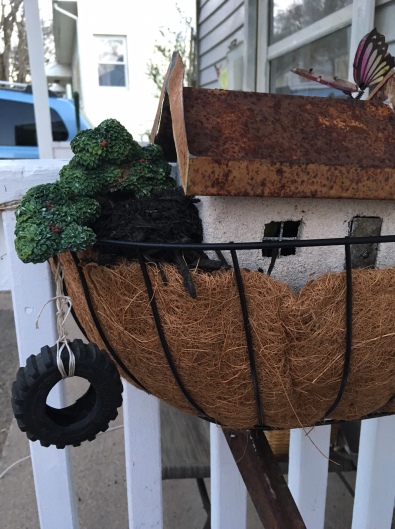 I am working on art too…Here are some unfinished pieces, bits and pieces of progress. This one is part of a piece called “Domestic Goddess.” It has a long way to go. Much like how I developed the gnome’s pond, I work in many layers and this is bare bones foundation, just a portion of a larger piece. 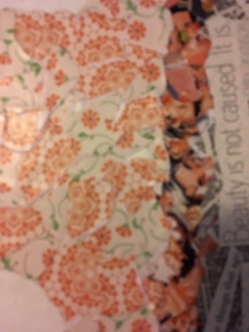 Here is a quite early stage of what is a ballerina-type woman, happily dancing alone on a tree, she is part of the tree itself. You can’t see her in this photo.

My son Silas walked in as I was developing the bare bones of this piece (part of my Goddess series) and said to me,

“You have so much patience!” 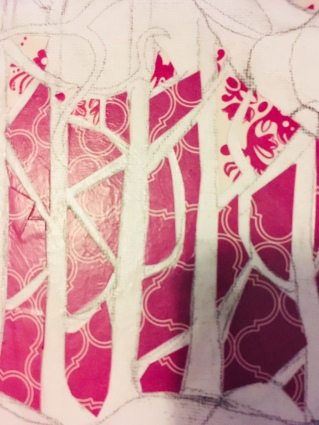 This is part of a very large piece which is almost finished. It is an abstract-surreal-style depiction of woods, my favorite topic, well, one of my favorites…I will post it when finished. I needed a break from it which is when I decided to start my Goddess series. But I will return to this and get it finished when the time is right. Viewed from afar, this piece really does look like a fanciful forest. Up close it works too.

I think I posted these in my last blogpost but since they are part of the Goddess series, here they are again. I always have ten or so artworks going at once!

These too, are unfinished, but the concept is in place. They are not really this dark- I think I took these photos in a dark room.

So here are some rocks I saw when I went for a (chilly) picnic at the beach recently.

Whenever my grandson visits, he takes used tinfoil (recycler, like me) and makes little sculptures of people for my shelf. This time though, he sculpted my name. 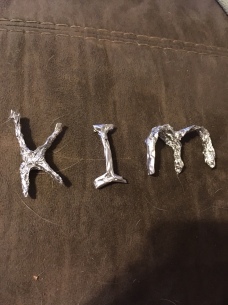 I can’t believe I have four grandchildren. When the girls visit again, they’ll be surprised to see my tree decorated. There are surprises in all the eggs. 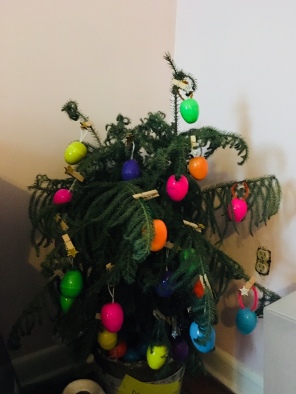 I used the metaphor earlier of my life being a stew, that’s a lame metaphor but it works. I’ve got a lot in the pot, so to speak. I don’t do well with idle brain or idle hands. Neither happens very often. I’ve got to get working now… Software bugs won’t catch themselves.

Before I go, look how my kitten Georgie has grown. She’s 1 1/2 yrs. old now. She has such a prey instinct! I can’t wait for Spring to fully arrive so we get a few flies in the house for her to hunt. She loves to catch them and even though we’ve had a mostly bugless winter, she has tracked the odd spider on the ceiling and stares at nails waiting for them to move. I have to play her out with a feather on a string every evening -a toy that my granddaughter made for her. 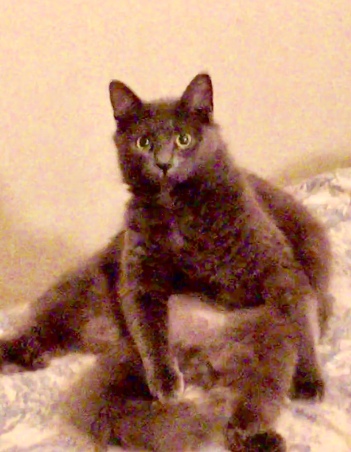 Last night there was a little accident. My elderly cat Mister Po (his FB page is HERE), has taken to grooming himself, biting himself really…obsessively. His hips are bad and he can’t jump anymore. He was doing the obsessive biting/grooming thing last night on my lap, when he tipped over, Trying to right him again, the meat of my palm under my thumb got between his teeth. Boy did that turn purple fast. And bleed.

He didn’t mean it. Did I say I’m going to start work now? Mister Po is laying on my lap desk! 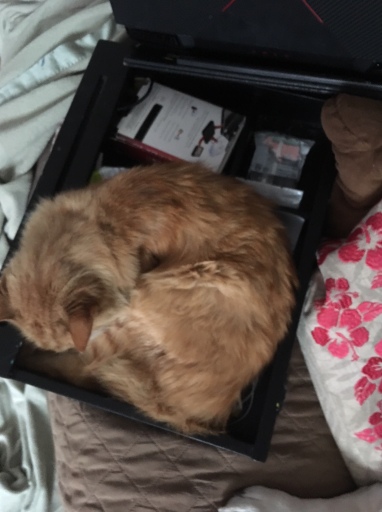 Before I go, please consider this, it is simple to check that box: 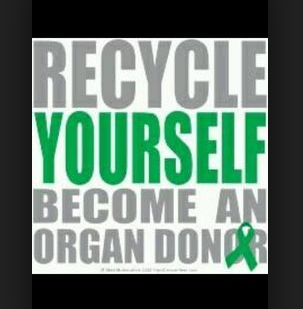 This is no joke. My loved one’s loved one (a very dear soul) is in need.

Links to recent articles you may want to check out relating to the film Desire, my art journey and in general-creatives:

I was honored to be a featured artist in Sanctuary magazine. Link HERE.