This blog post is interspersed with some of my newest paintings (no digital one’s here, these are paint) that I have been working on over the last few months. Some are collage as well. In some cases, I’m posting here just portions of the canvas as these paintings are in unfinished states. I’ve also been doing original paintings as underpaintings, and then using my puzzle pieces to ‘paint with paper’ over my painting, with careful attention to color.

When I was in my 20s, I lived at the corner of a 4-way intersection; on the 3rd floor of a 4-family house which had a hair salon on the ground floor. I had a son in grammar school (across the street) and I worked part time in retail; which was nice because I could for the most part tailor the hours to suit my son’s school schedule.

I was a non-driver, and I had a wonderful friend who drove me to work in the mornings, and every day before we went to our separate work places, we worked out an hour together at an all-women ‘gym’ where we were the die-hards in the last row, (this is what Sue, the owner, called us) thoroughly enjoying aerobic dance (choreographed by the effervescent Cathy). And of course we did weight training, calisthenics, kickboxing, LifeCycle, and stationary bike too.

At the end of my work day, my mother picked me up from the store and we climbed the stairs where she visited me daily for coffee (because she got out of work shortly before me- there’s synchronicity for you!) in my little kitchen with the old mirror, always streaked, that was affixed over the kitchen sink. My father would pop in too, about a 1/2 hour later after he left work himself. After a visit, they left together and I had time to help with homework and make the family meal; which was on the table when my roofer husband walked in around 6:00. This was my routine for several years; until such time as I became pregnant with twins, lost one during the pregnancy, was confined to bed rest and had to leave my retail job. He’s a healthy 27 yrs. old now!

But back to my little story. Let’s back up to my years living over the hair salon. One day, I was particularly excited about some mail I had received and I couldn’t wait for the visit with my mother, to share this exciting news with her. When we finally sat down with our coffee I announced my news and plopped the letter down on the table. As she began to read, I could see her features change, becoming amused.

“That’s right!” I said. “I really may have won a million dollars!”

(Collage/Painting: I thoroughly enjoyed painting this lady, and applying/collaging flora and fauna and ripped paper)

Anyway, I recall situations like the “Million Dollar” news and the “Friend for tea” and sometimes I wonder: is it surprising, with all my former naivete, that I racked up so many “Me Toos?” 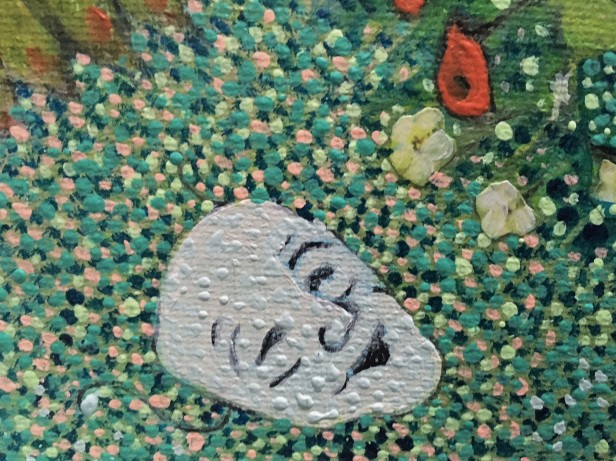 (Painting Pointillism Style portion of unfinished painting: As synchronicity would have it, the very friend who used to drive me to work, gave me a Tshirt with this SAME mask on it a few weeks ago. She had no way of knowing I had been painting this very mask.)

No, it is not surprising I had so many MeToos. I matured. I learned. I can say I never fell for the old Nigerian Prince email scam. The Men-blocked lists I have on social media are lengthy. I know how to ‘smell a rat’ pretty well these days. Oh, you might catch me taking something literally, it’s how I’m wired after all, but I am not the same person I was in my 20s. Who is? The brain has neuroplasticity, people are malleable, resilient, sometimes more than they think they are. Of course, I could tell you Me Too stories that would curdle your milk. I just won’t. I can’t share as candidly as I see so many brave women doing publicly. Note: Misogyny bugs me big time! In my writing, the MeToos are veiled, but they exist as sensitive topics that I just choose not to write about.

But we are not spared details when on a daily basis these days, we hear more and more Me Toos… No graphic detail spared.

I think it is the beginning of a discussion that needed to happen.

Although I write nonfiction memoir, for the most part, I often think and hope, that through my writing, newly diagnosed Autistics might say, “Me too” (but in a good way here), as my hope is they’ll relate to having brains that matter, but seemed to others, not to matter.

Both savvy and naive people can be prey, but these experiences don’t have to define how one sees oneself.

It wasn’t until my spouse succumbed to ALS at the too-soon age of 42, and the three children were grown, that I became attuned to what my skillsets really were.  I began to see my self as someone who did have something to say, “even if” that was through the written word and through paint. I also found work more fulfilling to me than retail: software testing. I wrote a book “Under The Banana Moon (living, loving, loss and aspergers),” (leaving, for the most part, the MeToo details out but hoping the book reached ‘my people’ and the audience I intended) and I have had successes in finding avenues for my artwork.

(Painting/Collage: I collaged punched out paper, flowers, circles, a butterfly and caterpillar here; great fun, and I painted over the butterfly wings, added glued paper to them for texture and painted the caterpillar)

That leads me to this from Sam Craft at Spectrum Suite:

We are pleased to announce Kimberly Gerry Tucker’s design concept has been selected for the new book cover for Everyday Aspergers (2nd edition, release date 2018 by Your Stories Matter Publishing Company).

I used my digital art program to create the design for Sam, based on a mime picture of myself. The art can be seen by clicking the link which also follows the end of this post. I probably put 40 hours into the digital art that won the cover. I had my digital art on this bookcover too (also based on a picture of me; I’m wary of using stock photos in digital work):

I am hoping that Paul at the Publ. Co., who is working with Sam, may agree to give my own memoir a sorely needed second printing, with extra chapters that may include my take on my youngest child’s transgender journey thus far. But we shall see how that goes. I haven’t even asked him yet!

I truly am honored to have my concept design (I work with Corel Painterx) on this awesome book Everyday Aspergers. The link is here. And also at the end of the post.

(Collage and Paint: This ‘self portrait’ is going to Rhode Island in March 2018. Details to follow. Great fun creating it. I worked on this while leading the collage workshop at Good Purpose Gallery in Lee, Mass. in mid 2017)

I happened to read a post on social media from a 20 something young woman (far more savvy than I was at that age, and very un-naive) who said something like this- she was

“‘sick of’ f’n people posting rainbows and butterflies like the world is so great and zen and happyhappy blah blah blah screw them and their BS.”

It’s true, we (the world) is in a sorry state. Politically, environmentally, you name it, it’s sucking big time. There are people, like my self, who’ve decided that positive breeds more positive. Anger and apathy are easier. They are catalysts, sure, raw and real; and this 20 something I quoted WILL find in 30 years she too will reflect that she was a ‘different person’ in her 20s. I hope for her she does find her own butterflies. As my friend Keri Bowers recently said,

“why not see Trump’s legacy as being an ‘opening to humanity.’ He teaches us what we DO NOT WANT. That. Is a good thing.”

(Oh dear my thumb appears in the corner of the picture here-lower right portion of my canvas: Original Underpainting with puzzle painting collaged on top)

When I started blogging a few years ago, looking back, I see I blogged sometimes 2 or 3 times a week. No more, my blogs are fewer between as my life becomes busier and productive.

I made a peace sign, with xmas lights wrapped just-so around it, to make a lit up Peace Sign, which I have in the front yard next to my little decorated (white lights) pine, which is destined for a chopping block, along with my Maple. I have to work on the peace sign decoration so it looks better. Am not entirely happy with the effect.

(I was…Speaking of trees, here are a few I have been painting, all as yet unfinished.) 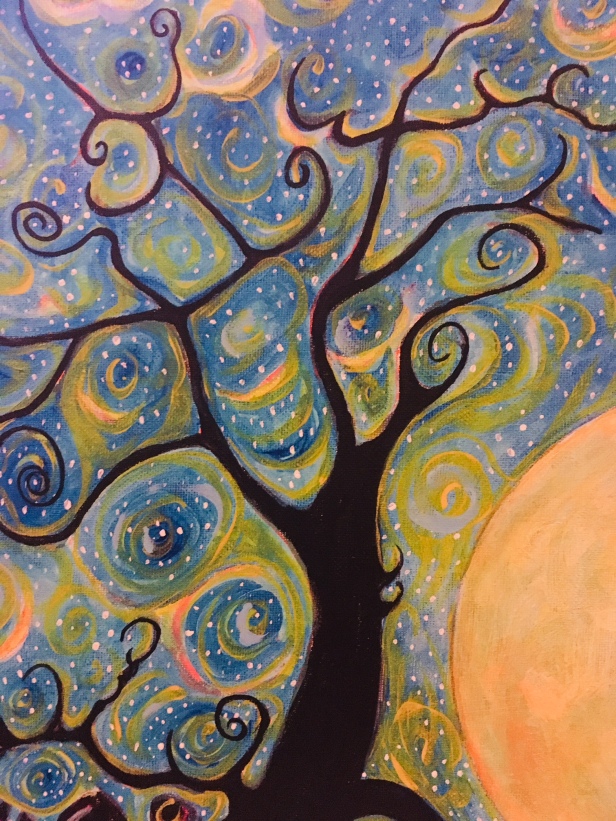 Smell of Al making cookies wafting from the kitchen. I’m going to quit this now and post:) but first here is that little pine destined to be chopped. It was snowing when I took the picture.

Happy Holidays. Merry Christmas. (Photo: I was checking to see if this plant climbing the window at the Good Purpose gallery was real. It was! See now, I’m not as naive. That plant almost had me hoodwinked though. Almost!)

Here is the link to Spectrum Suite where the announcement appears about my being chosen for the cover:

This links to some of my artwork:

Here is a link to my memoir. Contact me if you’d like a signed book and I’ll personally ship it or click here for the amazon site: