This particular blog is for at least aged 14 and up…That having been stated (probably just a dare to some of you), I am going to share an ‘accidental’ children’s illustration. I ask myself, when I see these mishaps, did the illustrator do this on purpose or really make a faux pas? Perhaps, scrutinizing minds make mountains out of molehills, so to speak (creating racy-ism where none was intended). For example, this Disney castle: 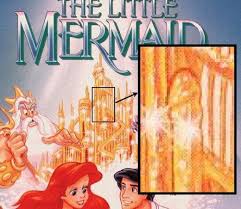 I can remember finding a few oddball things like this myself, years ago, in storybook illustrations and had a good laugh reading the stories to my kids when they were small without letting on what I found so funny. This is what made me think of this subject:

While I was in the library (I’m there a lot), my 9 year old grandson was reading a book to me, as he does often. We came across some illustrations by author/illustrator Victoria Chess in a book called ‘The Costume Party,’ and these odd illustrations were definitely intended! 🙂 Here are some that I found humorous, which probably says something about my maturity level, but I really don’t care. Firstly the cover: 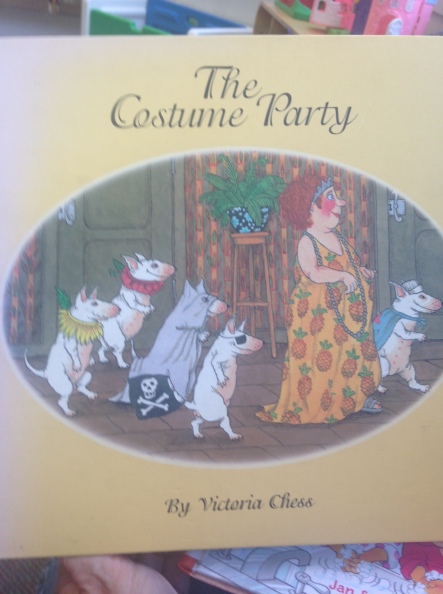 and now the funny ones… 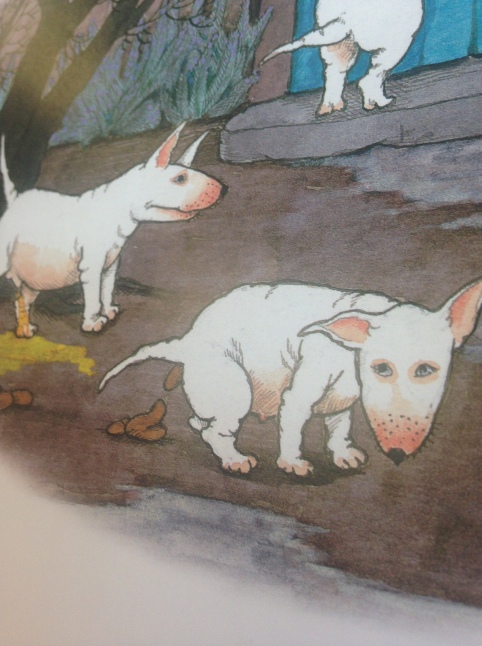 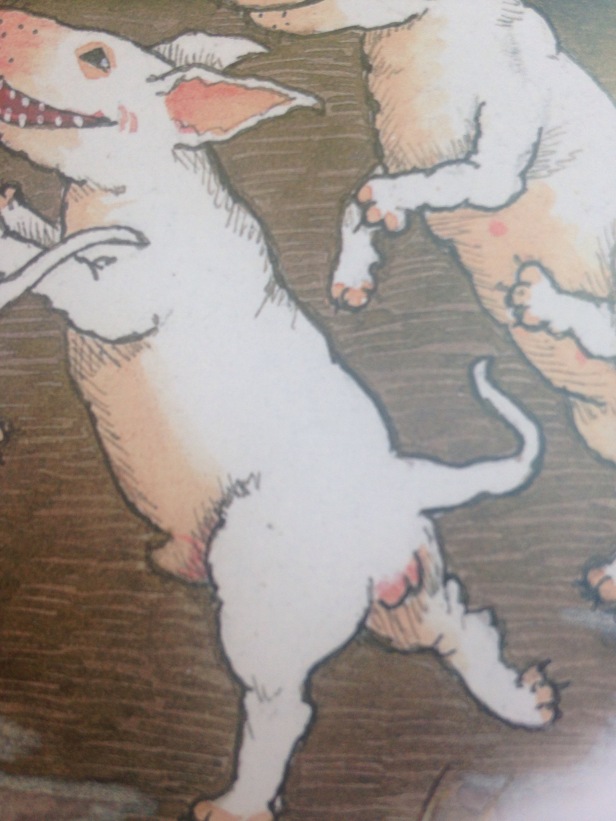 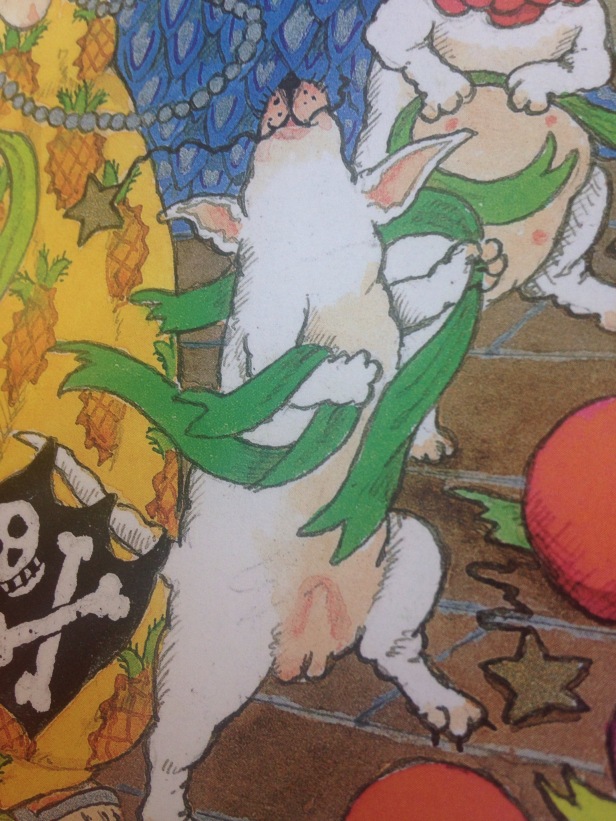 Almost too much information there, huh? 🙂

Before I let you in on my own little quite accidental

I want to share some of the other things that have been going on in my world. This was seen: 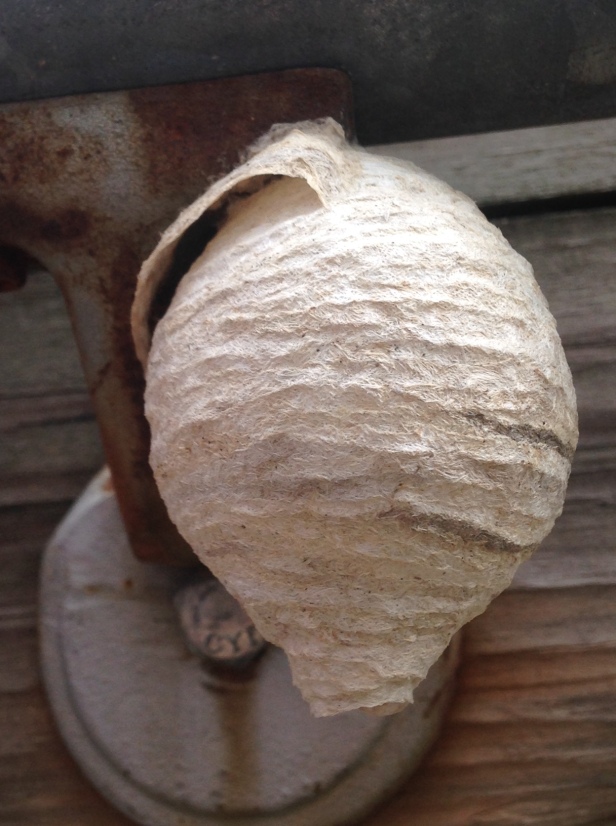 It’s a perfect “paper” hornet nest that was attached to the underside of the rail at my house. I saw something else noteworthy too. But first some backstory-the reason I have recurring bear-chasing-me nightmares to this day.

When I was little, my knowledge of bears consisted of the cartoon bears Yogi and BooBoo, Grizzly Adam’s exploits with his pet bear, and also what I had read in encyclopedias and seen on the odd nature special that Disney liked to make for its younger set. Usually those bears were fairly friendly but I had learned in school they were not. One ordinary day in Vermont, (I was 7 or 8)  I walked with my younger cousin down a pine needle covered bank behind my grandmother’s house in Vermont. It was thickly wooded, and from our fishing spot near The Big Rock (which housed the notorious creyfish we called TheCrabWithTheBigGreenClaw), we could barely see the big white house at the top of the steep hill.

We were fishing for some time when I looked across the brook at  the meadow there, which ambled down toward the babbling water. I’d seen something black. And it was moving. Then another something black. It took me a moment to realize I was seeing bear cubs because they were almost galloping/running, and quite fast too- toward the other side of the brook, right across from us. It was a shallow brook, not more than a foot deep. I had an aha moment where I realized bears did not really walk upright on two legs like people. Like Yogi. I took my cousin’s 5 year old hand, dropped our poles, and suggested we go back to the house.

She didn’t really want to go but she let me lead her. The orangey pine needles on the path were slippery and it was steep. I had heard my teacher say that mother bears attacked if cubs were around. I was sure that’s what I’d seen. The walk up that hill was intense for me, I never let on to my cousin what spooked me, and I never looked over my shoulder the whole way. But I was sure that mother bear was bearing down on us, pun intended.

A few weeks ago I said to Al that there have been so many bear sightings that it’s a matter of time before I see one. Last Sunday, we went for a Sunday drive and cut through some back roads to take the long way home. About 100 yards up ahead, something very black was crossing the road. My mind had no reference. It was too black to be canine and besides, it seemed almost svelte, feline-lithe with its smooth long legs, was I seeing a black panther? Of course not but my mind did consider that for a moment.

And then it clicked. “I’m seeing a bear! I’m seeing a bear!!” I said to Al, who was almost as excited as me and stopped the van ten feet away from it. I wanted to be in the moment so I wasn’t going to go for my phone but I dug it out of my pocketbook anyway and started snapping pictures right away, without looking at the phone. Here it is after it climbed over the fence.

It immediately climbed a tree and hung there watching us for about a minute or two. Look at those claws!

Perhaps bears are more commonplace where you live. My father, for example, a resident of Vermont sees them all the time. But I just don’t. 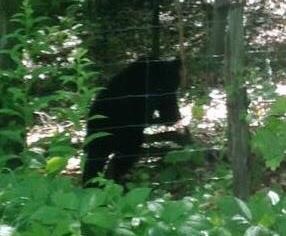 After it was through being photographed, it dropped to the ground and took off toward a body of water in the distance. A place I had fished many times over the years.

Bear sightings are becoming more common. One was seen in a parking lot where I’ve shopped a lot in the past. The bear made news because it just didn’t want to leave the mall parking lot. We are encroaching on their territories, there aren’t a lot of bear hunters in Connecticut, and frankly they don’t have animal predators to cut their populations down….

It used to be that seeing eagles was not commonplace here. As of about 7 years ago, I now see eagles a lot. Al and I were eating pizza just last Friday and our view of an abandoned smokestack on a factory, revealed a pair of them living on the top of it. It’s not uncommon now to sit on my front porch and catch them soaring overhead much to the displeasure of the local crows and jays.

Herons are now common sights too. And there are coyotes across the road from me (where the caves are up the mountain) that I hear on a regular basis and see from time to time. I like unexpected surprises like these animal sightings.

Another surprise? I found a gold ring that belonged to my mother, in a soggy box last week, when I cleaned up my basement flood! Maybe some good did come of that fiasco… Since I have extremely bad luck with rings, this brought happy moisture to my eyes. 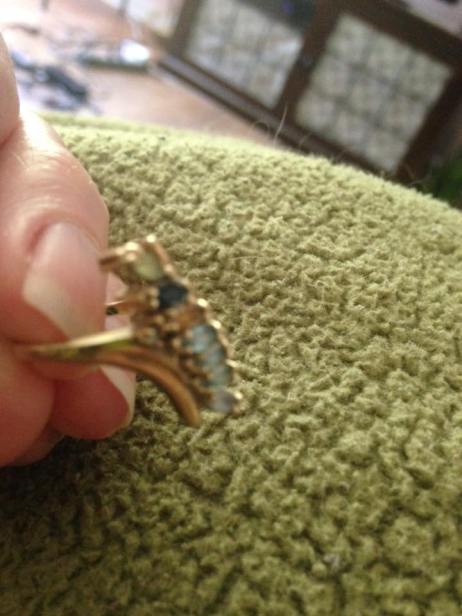 I also had to clean out my closet because water from the flood cascaded under the closet doors upstairs after the toilet was flushed. Something good came of that too. I found these two news clippings that had appeared in the New Haven Register around the time I first had some luck publishing stories. One article was also about my husband at the time (now deceased) who was terminally ill. The picture below is an odd one. The reporter had asked me, “Do you have any artwork? Since you’re an artist as well as a writer, I’d like to photograph some of your art.”

I went to my sketches and the guy saw me with this failed self portrait in my hands. “What’s that?” he asked.

I told him, “Well that’s nothing. Just something I started and didn’t like so I ripped it in half. I don’t even know why I saved it!”

“I have an idea,” he said, and suggested we go outside to the back porch where the light was brighter. He then instructed me to hold the torn sketch over the top part of my face. Before I could make a pleasant expression he snapped the following photo which made it into the article!:

This second photo below was taken for a different article; and by a female photographer who had the idea I hold my mirror up and reflect my daughter sitting on her father’s lap. He would live just a few more years. Actually I still have this mirror and it hangs besides me, affixed to a 150 year old salvaged door which is propped leaning against the wall beside me, because the mirror is too heavy for these walls.  Again, my expression is lacking! But it is a very creative photo.

So that just about catches you up on what I’ve been doing. I’ve also been playing PokemonGo, at least for awhile. I had to see what the hubbub was. It’s fun. And free. Look what I saw at the library and also flying around my living room: 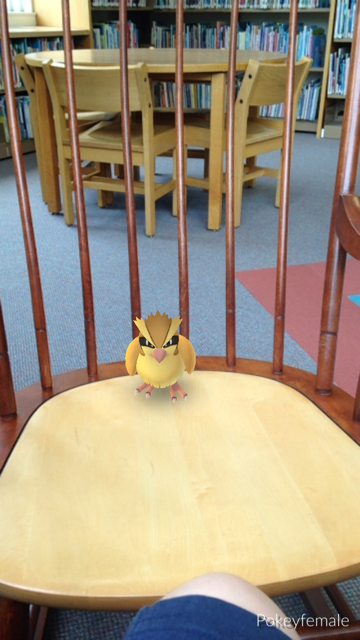 Oh yeah! I almost forgot the reason I declared this musing as suitable for age 14 and up; (maybe 18)… I made about five drawings recently and I haven’t yet added the final touches of paint and color. Here is one such sketch of a couple of delightfully animated trees: 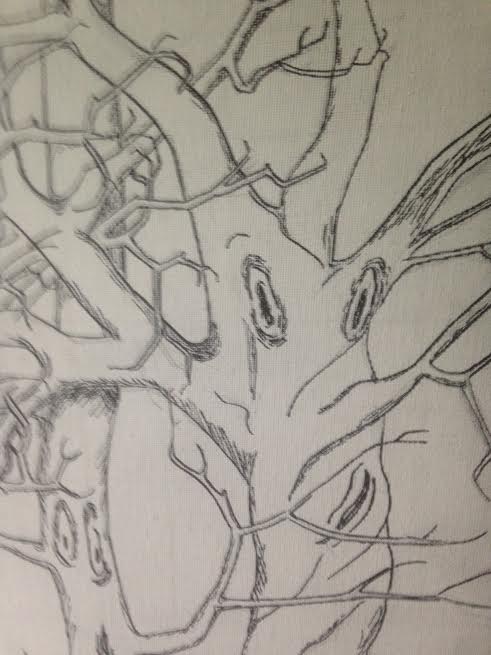 Do you see it??? This was purely accidental. Entirely unintended. My trees have lady parts! What will I do? Paint over it? Leave it as is and hope no one makes the connection? I don’t know. I had a good laugh over this. Now that I’ve noticed this…

I CAN’T UNSEE IT!

Well that’s all for now… Thank you for reading. I’ve got some DVR’ed recordings to watch now that Comcast has decided to fix the outage.