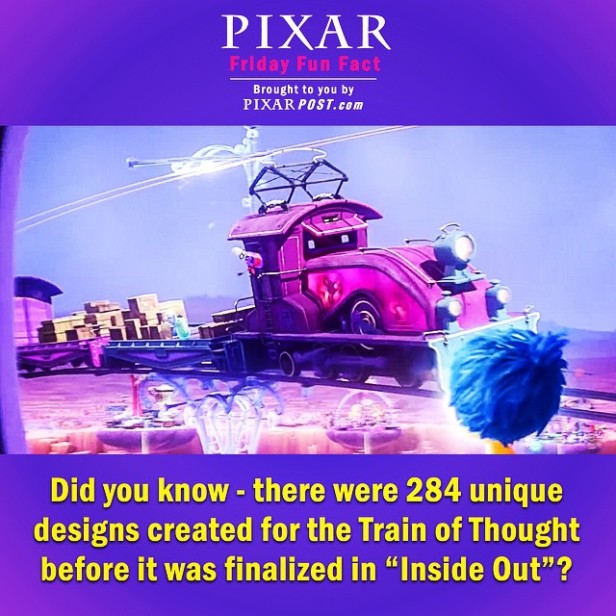 Somewhere on the planet as I type this; gurgling, burbling geothermic hotspots spurt predictably (like certain presidential candidates) and just like Old Faithful, Pixar presents us with another animated film. Inside Out is about feelings; so I was putting this one off. Eventually I did give it a watch. Turns out it’s literal, it runs with metaphors, and it’s heavy on symbolism. I like the creativity behind that sort of wit. In a way this movie reminds me of that movie I loved as a kid: The Phantom Tollbooth.

In Inside Out, we go inside the main character’s brain where there’s a train choo-chooing along; carrying stacks of labeled boxes. The boxes are full of thoughts because this train is after all, the character’s “train of thought.” Anyway, a character worries when some boxes labeled FACTS and OPINIONS tip over and get all mixed up. Says another character,

“Happens all the time!”

It really does. (Think: presidential debates…)

There are so many grey areas between fact and opinion.

When I was in grade school, we took recess on a paved lot surrounded by a fence like this one: 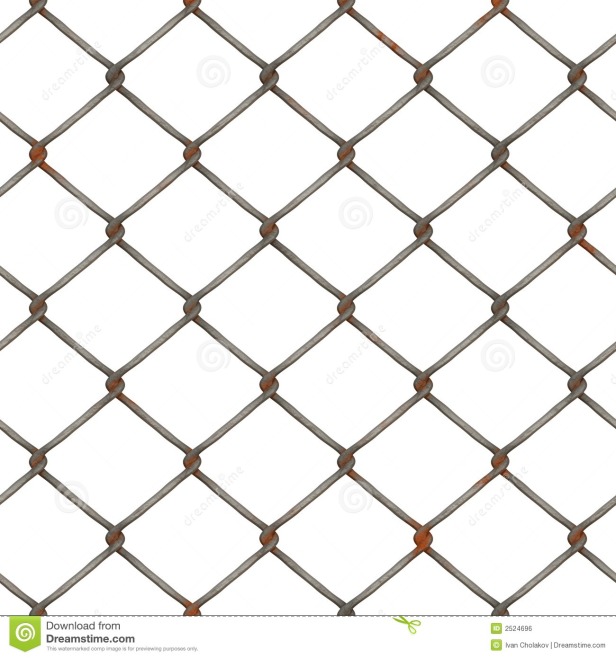 One day my friend Starr and I crouched behind an opening in the fence and gathered small piles of stones from around a patch of sparse trees there where we sometimes swept gravel and sand with a broom made from tree arms. If we were seen behind the fence, Nanny the playground aide would scold us (and she often did) but this was a more interesting play area than the intended one; which is where kids played tag, bounced balls, shoved and insulted, ran screaming for no apparent reason and had organized kickball games. A group of kids, mostly boys were indeed playing kickball that day.

As you can see from the picture, the old grey fence had diamond shaped holes. Those holes would land me in the dreaded office of principal Adeleine Tripp! The idea behind my little game was to toss my pebbles clean through the holes in the fence without making a chink sound. This required careful aim. If the stone chinked off the fence, then that throw didn’t count. Both Starr and I’d throw one after another and if the pebbles made it clean through with no sound, then we squealed; delighted with ourselves! We took turns and kept score with a stick and some dirt. 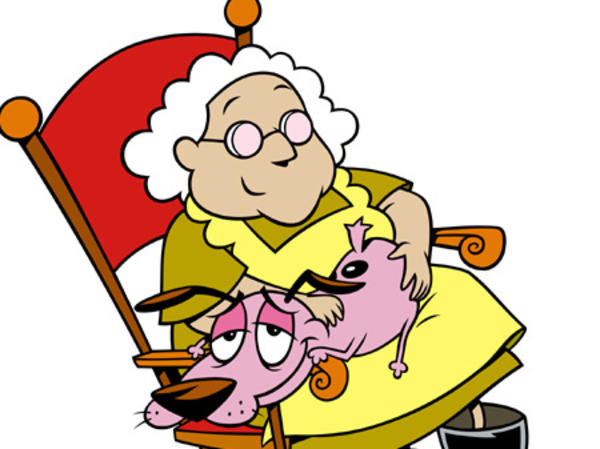 came and got us; her brow knitted in fury. We were escorted to the office where Mrs. Tripp (shaped quite like a tea kettle) sat brewing behind a desk in a no nonsense black dress and scowling at us in a professional way. About 500 years old, bespectacled, with burnished hair the color of antique silver, she could’ve been 10 feet tall and not the 5 foot 2 inches she probably was. I knew I wasn’t supposed to go behind the fence but I’d never gotten in this much trouble before. Previously Nanny had just told me that if I didn’t want to join in any games- I could go sit on the concrete wall until the bell rang. (We really did have a bell; a big clanger up in the bell tower high on top of the school.)

So there we were-Starr and I, seated between the two greys: Mrs. Tripp and Nanny.

What?! The pebbles were a half inch wide at most. Besides, we hadn’t been doing that at all!

Had the stones skittered through the fence and actually hit the boys as they played kickball?

(((That is an example of the train of thought taking a sharp turn and spilling some boxes.)))

The fact was that we threw stones at boys. Albeit unknowingly. My opinion was that it may have happened, but wasn’t intended. I was oblivious. Our punishment? A long shame-filled scolding. Our explanation amounted to dribble and was futile.

We weren’t allowed to finish out recess. We had to sit there with the fresh air and noise of recess beyond the tall windows and beyond our reach. When it was time to go back to class, Mrs. Tripp stopped us before we could pass by the secretary Miss Overton’s desk and over the threshold to freedom.

“What are your addresses?” our grey lady principal, as imposing as a battleship-demanded suddenly.

I didn’t know mine and Starr didn’t know hers either. We must’ve been nothing more than first graders.

“You don’t know your addresses?!” she thundered. “You will memorize your addresses. I’ll ask you that question again in exactly one week. You may go.”

I murmured this in the lunch line, as I bathed before bed,

recited it as I ate supper with my parents

and as I descended stairs to the library or cafeteria.

I practiced my address mantra as I sat on the wall at recess.

When I passed Mrs. Tripp in the halls I avoided her penetrating gaze.

She did not ask either of us our addresses a week later.

Funny how Nanny caught us throwing stones at boys (which we weren’t really doing) but she never did catch us sneak clean off the school grounds several times a week, visit the bakery next door to the school and purchase fireball candy and big soft sugar cookies with colored sprinkles!

Facts are concrete and can be documented.

FACT is, we were troublemakers in our own ways, in fact in ways that were very unsafe-but it seemed a great injustice at the time to be accused of purposely trying to pelt boys with stones. That, was in our opinion, just an adult opinion. Distorted facts, in fact. We were labelled as trying to harm someone physically and truth be told we even avoided stepping on ants!

The original grey/green/rust colored bell from the old school is now on display somewhere. It weighs 500 pounds, with a 26-pound ringer, for a total weight of 526 pounds. The original bell cost 17 cents per pound, which calculates to a total of $92.05! Here it is in its greyness, before it was refurbished and made silver-shiny: 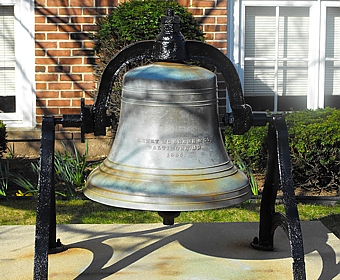 The colors are there still beneath the silver version. Personally speaking, I’ve never been refurbished into silver shininess. I have retained my original grey. I’m sure that the train of thought in my own brain is indeed quite grey but the thoughts in the boxes- those are quite colorful! Recently I finished reading the book: 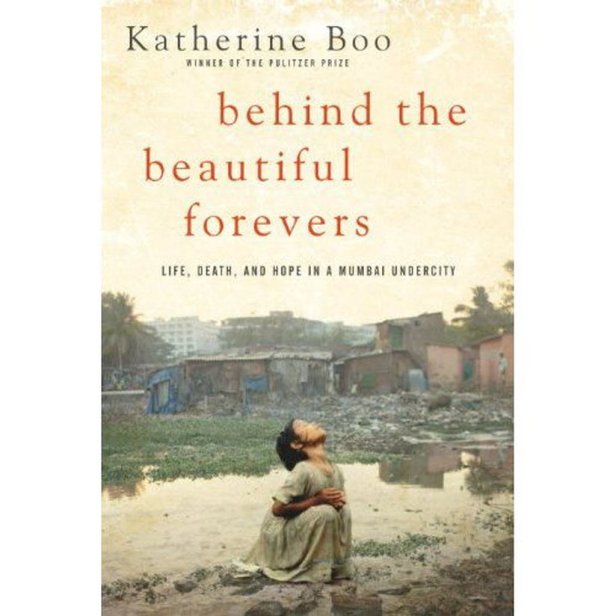 This is A WORLD OF GREY, in the worst possible ways though. Alongside a hotel in Mumbai, across a fence similar to my childhood fence, there is a long long banner advertisement for tiles of all things. Colorful ones! The ad promises in wide bold letters to keep your kitchen Beautiful Forever! Beautiful Forever! Beautiful Forever! Behind the ad where “beautiful forevers” is written over and over, is the Mumbai undercity (“slum”) where the purchase of tiles proves to be a catastrophic life-changing life and death experience for many.  Illnesses like worm scalp, boils, rat bites and AIDS prevail; and for want of something nice, people die. Risking their health and their lives, hardened children collect trash to recycle and help support their families. Young ones are murdered over trash rights. When they can, they play. It’s an eye opening book of eyesores, hardscrabble, yearning and hope.

My own childhood front yard had an ad too- a highway billboard which advertised toothpaste one week, gas stations the next. It was not Mumbai. Unlike those children, I played on heaps of discarded junk. I did not collect it in order to buy rice.

The yard had a tangle of sweet wild grapevines, a swingset with silver posts gone grey and rust. Lovely. –and a towering sandbank as tall as my grey house. Grey, an in-between color. The topmost of the sandbank curled like a wave, with the wispy fringe of sparse tree roots beneath it where surely burrowing animals found snug hidey holes.

If white is the absence of colors, and black is the sum of them all, then grey is both. As many people do, I saw colors swirling inside the grey of my house.

In fact our living room linoleum was a swirl of grey with subtle greens, pinks and blues. Or did I imagine the colors there?

I have to go now as my son’s best friend has requested that I paint him a version of The Last Supper as his Christmas present. He posted this on FB (the italics are mine):

Hi Mom! (he calls me MOM) I hear you are looking for my request for this year’s Christmas painting. (I paint him a request eavery year) Welllll…………wait for it……….this year let’s go a little religious. I’m thinking a Last Supper kind of thing, but without the apostles and Jesus and instead add a mixture of famous figures like Carnage, Venom, Scraggy, Mr. Po, Thanos, The Joker, Cell, Jeremy (that’s my son), and Groot. I’m smelling another Kimberly Gerry-Tucker classic this year!

Welllll………….as you can see, I’ve got some painting to do! 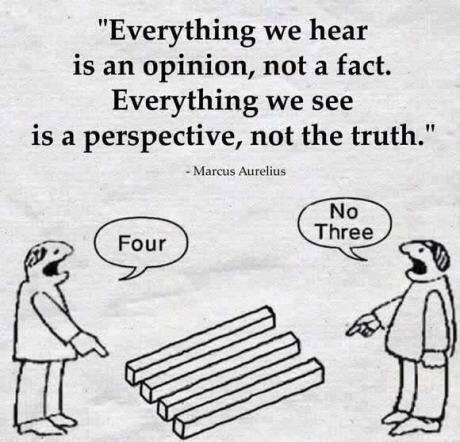 2 thoughts on “BETWEEN THE GREYS”

I’m curating the contest again this year: Art of Autism is accepting art submissions by autistic artists any age, for this year’s 2022 Women’s History Month. Please send art image(s) to kimberlygerrytucker@gmail.com (by Feb. 28, 2022. Prizes again this year and ALL art will appear on Art of Autism’s Facebook page during March.) let’s celebrate women! (Famous to all or beloved to you)
Everyone went home. Now these guys can come out of hiding. 💛
Truth