On the third Thursday in June, National Dump the Pump encourages people to ride public transportation, instead of driving, and save money.

June 18 annually celebrates National Go Fishing Day.  It is a day to take time from your daily routine to go find a stream, a pond, a lake or a river, bait your hook, cast out your pole and catch a fish or two!!

June 18 annually celebrates a fun, feel good holiday that was created for you to do something special for yourself, it is National Splurge Day. Splurge, (as defined at Dictionary.com) is: to indulge oneself in some luxury or pleasure. It is time to pull away from the everyday busyness and sometimes stress of life to treat yourself.

(as started by Aspies For Freedom) Autistic Pride Day is a celebration of the neurodiversity of people on the autism spectrum held on June 18, 2015. The day is celebrated annually and “Autistic pride” stands for pride in autism, about shifting views of autism from “disease” to “difference”. It observes the diversity various neurological types express.

As for June, in general it’s an awareness month for the following topics (as shared on http://www.healthline.com/health/directory-awareness-months ) :

The term “Self Narrating Zoo Exhibit” was coined in the 90s by autistic advocate Jim Sinclair. It describes an autistic person as a walking vehicle of knowledge. There is a depersonalization of the person whereby the autistic person is viewed as a “knowledge provider.” I urge you to read Jim’s “Don’t Mourn For Us” (link provided at bottom of blog.) It sums up exactly what Autistic Pride means.

Personally, reading memoirs about fellow autistics is one of my favorite past times. I don’t see this as the author’s being self narrating zoo exhibits, but rather as chroniclers of human experience. I recently read Oliver Sacks’ book “On The Move” and he has this to say about his own use of “case studies” in his books:

“Reviewers see me as specializing in the bizarre or exotic but I follow Wittgenstein’s dictum that a book should consist of examples… this illuminates the neurological impact and experience as well as unexpected workings of the brain.”

Sacks considered Temple Grandin’s autism a gift and a fundamental source of creativity and originality and as her having an unexpected adaption and compensating gifts which led to her work in the cattle industry.

I always saw Torey Hayden’s books in this light. She too took flack for writing about patients, some of whom were autistic, but you know what? She too follows Wittgenstein’s dictum. I bet she’s taught SO many about autism through her work. I know she has taught me. Torey:

I highly recommend reading her books.

When I think of Autistic Pride, I think of all the people I have come to know or have read about who are autistic. Each and every one of them have added something important to my life. There are many ways to ‘leave a mark on the world.’ We all do it; every day, by our actions, words, kindnesses and through the littlest of gestures. If we err, or if someone errs against us, we all learn from it. As I type, I am aware that Van Gogh (who may have been neurodiverse/autistic) used an inferior quality of red pigment in his paintings. The red is disappearing, or degrading, and may in fact be completely gone in a few decades. The blue irises weren’t blue; they were originally purple, but the red has faded away…

He’s truly left his mark on me.

“Great things are done by a series of small things brought together.”- Vincent Van Gogh

Go visit a Van Gogh. Not a print. A real painting he stood before creating it. I will never forget my intense reaction to seeing Night Cafe (shown below). 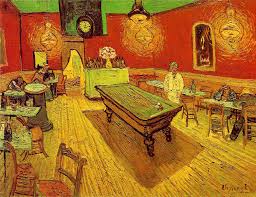 Donna Williams– (Wiki defines her as follows: Donna Leanne Williams, also known by her married name Donna Leanne Samuel (born Donna Keene in October 1963), is an Australian writer, artist, singer-songwriter, screenwriter and sculptor.) She is many other things as well… including a breast cancer survivor. And also my friend and mentor.

” It was 1995. Kimberly Gerry Tucker first entered my life quietly through a door in a cute living doll’s house in Connecticut. I was a newly published author on a publishing tour in the US and in Connecticut for my first ever public lecture at Trinity College. Kimberly was an undiagnosed Aspie with Selective Mutism and severe social anxiety. She was towering and I felt very short in her presence. I was bouncy and she was timid, gentle and humble. Years later, Kimberly had an added diagnosis of Asperger’s Syndrome and I read Kimberly’s first book. Now I have trouble with receptive speech both spoken and written, so I’m just not a fluent reader, but Kimberly’s book grabbed me by the gut and throat and by the end I had cried a bucket. I interviewed her about it.”

I remember meeting her in that blue house with the daffodils lining the path to the front door, straight and yellow soldiers at attention; greeting me stoic like. Did I think of her as famous? I didn’t. Did I bring something for her to sign? No, I did bring a petrified mushroom and a wind up piano with a penny stuck inside, which she tried to shake loose. Did I make sure I got a picture with her, of her? No, not at all. Those things never occurred to me. I thought of her as a peer. I admired her then as I do now. I recognized a brilliance of spirit, humanity and determination in her that is rare. In the brilliant Forward she wrote for my book “Under The Banana Moon living, loving, loss and aspergers” (she edited an early version of it as well) she said this:

“Howie was no monster but he was not politically correct either.  He was a ‘rough-and-ready’ type of bloke from the same raw, tell it like it is, reality Kimberly grew up in.  She saw him beyond his often insensitive, even flippant reactions and still saw him beyond what his disease reduced him to.  She saw him even when she’s stopped seeing herself.  And it is this that leaves me so awestruck about Kimberly Tucker.  I identify with her in so many ways.  I am proud of her.  Let her hide from the world if she is safest in such a ‘cat corner’, but her individuality and humanity will still jump out as long as she allows us that window through her ARTism, through her writing. Dare to read this book.  She dared to write it.  You won’t forget it. … Donna Williams

Author of the international bestseller, Nobody Nowhere.”

I am the one who is awestruck by Donna!

Here is “Sensing” by Donna. Check out the link below for her art.

Clay, Colin, Jane, to name a few- thanks for what you’ve added to my life. This day, International Autistic Pride Day, feels like any other day to me, really. It is June 18th, (although I’m technically writing this on June 17th because tomorrow is a busy day for me) and June 18 is three days after the tenth anniversary of Howie’s death. Does anyone even know that June 18 is Autistic Pride Day? Or Fishing, Splurging, and Dump the Pump Day? I like to think there’s one person out there who will take a bus to their favorite fishing hole, cast a line and open a picnic basket full of Twinkies (or whatever their splurge food is) and while they’re taking that bus and fishing and splurging, they’re thinking about what it means to have Autistic Pride.

Hey it could happen! My daughter and I (about ten years ago) once took a taxi to a nearby stream to fish, and then (fishing poles and all- DUMP THE PUMP) took the taxi home. While we were there we splurged on snack foods… I don’t recall whether or not this took place in June, but for me every day is Autistic Pride Day anyway.

Petroglyphs, statues, cave drawings, books, artwork, random acts of kindness… We humans leave our marks in all sorts of ways: I’ve read about a scientist who stayed over at a friend’s house, and worked out tough problems by writing (in pen) all over his bed sheet, for lack of paper… Oliver Sacks filled thousands of notebooks with ideas, theories, observations. In fact Sacks and a colleague once wrote all over a paper tablecloth at a restaurant while explaining principles to each other… And then there’s that chalkboard recently discovered, which was hidden behind the walls in a classroom during a routine remodel. Here’s a small portion:

untouched for nearly 100 years. Protected and totally undisturbed, the century-old writings and drawings looked like they were made just yesterday.

Some new art I’ve been working on, acrylic underpaintings on canvas with puzzle pieces modge-podged over the drawing/painting… 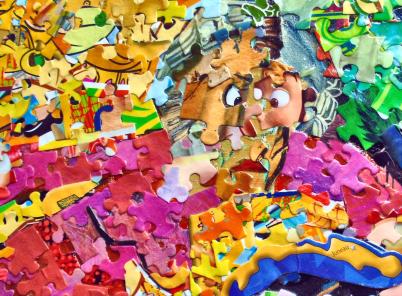 My book is available at this link, I hope if you’ve read it you will leave a review and if you haven’t, that you will pick it up here

PLEASE READ Don’t Mourn For Us, it truly sums up Autistic Pride

Found on http://nationaldaycalendar.com/calendar-at-a-glance/june/  this site lists our Months’ awareness days

Interviewing Me by Donna: http://blog.donnawilliams.net/2012/07/11/under-the-banana-moon-by-kimberley-tucker/