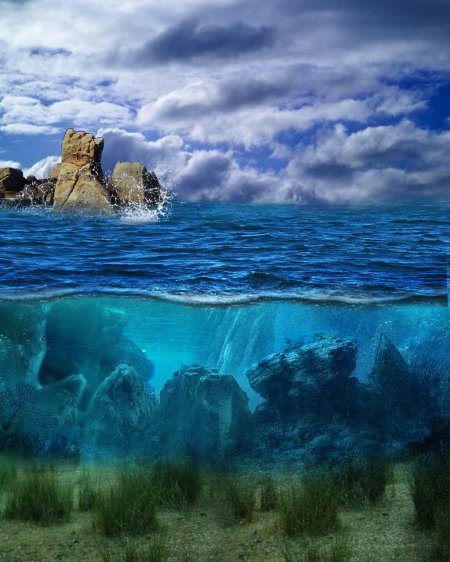 Ocean is more ancient than the mountains, and freighted with the memories and the dreams of Time. —H.P. Lovecraft

The whole premise behind the “floating” or “illusion” or invisible” necklace, is that evenly spaced pearls, stones, and/or beads are strung along a nearly transparent nylon ‘fishing line’ which lays suspended against the throat. See image below.

Of course, this effect gives the perception that a necklace is not being worn. The gemstones appear to be suspended as if by magic without aid of an actual chain to hold them.  The following picture is an example of what I’m describing, although it’s not the exact string of rubies my mother purchased: 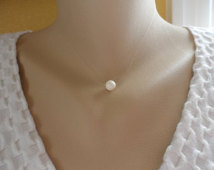 My mother bought one of these kinds of necklaces for her sister’s birthday back in 2004. It came in a velvet lined box which was labeled as: “Invisible Ruby Gemstone Necklace.” My mother, in her 60s then, was the youngest sister in the family. After being presented with the gift, my aunt opened it with much enthusiasm and upon seeing NO necklace, she then announced, “It really is invisible!”

She held the empty box up to the light and she turned the box upside down. She peered under the edge of the velvet in the box. She double checked the wrapping paper for signs of a necklace. She shook the box in case she was just not seeing it, and then decided with a smile and some degree of certainty that this must be a gag gift.

My mother of course, was perplexed. “Wait a minute!” she said. “It’s in the box! It’s not really invisible.”

My aunt replied, “It says ‘invisible’ on the box.  So it must be invisible. I don’t see it.” She decided she should go get her magnifying glass.

My poor mother at this point, put her hand up to her neck and nervously fidgeted with her own necklace. “I just saw the invisible necklace this morning,” she said. “And I tried it on before I wrapped it, to see how the stones looked…to see if the chain really did look invisible.”

“Carol…” said my aunt, “would you be wearing my necklace right now?”

“Oh for heaven’s sake,” said my mother. I AM wearing it! I must’ve forgotten I tried it on and then wrapped the empty box!”

“Oh it’s pretty!” said my aunt. “I was beginning to think you were cuckoo!”

My mother  immediately unclasped the Invisible Ruby Gemstone Necklace from her neck and put it back in the box. “Let’s try this again, shall we!?” The women had a good laugh over that one.

My mother passed away just a few years later and toward the end of her life her memory REALLY went. One day (my father tells this story) she woke from a very deep nap and asked him about me… “I wonder what Kimmy is up to… Gee, I haven’t heard from her in months.”

“You talked on the phone with her this morning for half an hour,” he reminded her. “You talk to her every day…” 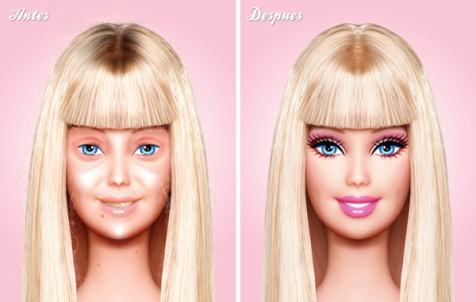 Those are BRATZ dolls and also a Barbie doll … all with their make-up removed. Someone took nail polish remover to their faces. Who would’ve thought these overly sexualized stereotypies were hiding something far more REAL?

What do we really store in our memories of the actual people in our lives? The surface stuff is easy to recall. What about the stuff that’s under all that? Think about someone you know. A visual probably comes to mind first, right? Many different visuals come to my mind of my youngest child…. But all that’s visual. So now conjure a good memory/anecdote about them. Forget the surface stuff. It’s a good way to pass the time.

My oldest son at the age of five… He was seat-belted into the backseat of the cream colored Chrysler one ordinary day, an only child then, watching out the window as autumn scenery flew by:

the natural beauty of Connecticut’s splendid woods,  with his keen eyes trained to spot wildlife enjoying their natural habitats… And sure enough he spotted something moving in the woods! Oh, the sound of his excitement, his passion, his wonder, at seeing such a sight!

“I saw a giraffe!” he yelled. Curiously, I turned to face him in the backseat and saw his face was lit with innocent and quite real conviction. He was pointing out the window excitedly. “I did! In the woods! A giraffe! I never thought I’d see one but I did! I saw one back there!”

That son shaves his head now and has a soul patch under his lip   -he’s six feet three. Still possesses deep convictions and vivid imagination!

My middle son at the age of five… It was winter. Christmas ‘season,’ to be exact, and I’d just read him the story of “A Christmas Carol” by Charles Dickens. There was a beautifully illustrated picture of Tiny Tim on the last page, with his happy family and also Scrooge, seated festively around a dinner table. I read the last line to him and closed the book:

he asked, “God bless EVERYone? But why? Did everyone sneeze?”

My middle son is a Toby Maguire look alike. He’s as logical and kindhearted as he is wise beyond his years. He’s still just as inquisitive as he was as a little person. Both my sons are students of the paranormal. One of them has chatted with Ryan Buell. One has investigated with TAPS. They are in their own paranormal groups.

My daughter at the age of five… She had been in Kindergarten for about a month. I walked her to the bus stop every morning and we would try to walk along the raised curb without falling off. Back and forth we’d go, balancing one foot in front of another, falling off and going back to the beginning and starting over. We’d chat too. “I have an aide at school who only has one arm!” she called out.

My two sons are men now. They have three children between them. My daughter is an adult who is transgendering into a man: 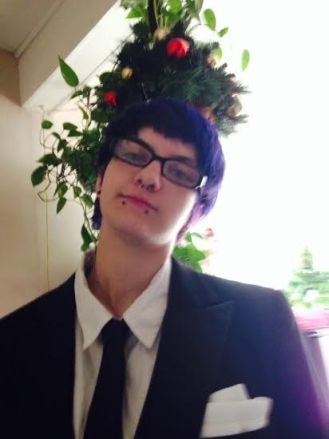 He’s an onion. Peel away layers and he’s the little person with the logical way of thinking, balancing on the curb with me.

Forgiving does not erase the bitter past. A healed memory is not a deleted memory. Instead, forgiving what we cannot forget creates a new way to remember. We change the memory of our past into a hope for our future.

I remind myself to be amused by the fact that sometimes the best things are invisible.

Never make your home in a place. Make a home for yourself inside your own head. You’ll find what you need to furnish it – memory, friends you can trust, love of learning, and other such things. That way it will go with you wherever you journey.

FullSpectrumMama here on WordPress says of me, that I “write myself into hope.” She does the same thing! You should check out her blog.

Incidentally, I paint myself into hope too! Susannah Lawrence just sent me a link. Scroll down at this link. “Spotlight on art”, my paintings are the last three:

Spotlight on Artists on the Autism Spectrum

ocean image in this blog comes from: (( Moonglowlilly at http://moonglowlilly.deviantart.com/art/Ocean-Bg-Stock-340063593))