Synchronicity is a funny thing. It surprises you as you go about your day to day activities. Take for example, owls. And catawampus things.

The other day, I looked out over my view of the world from my living room; a short expanse of backyard, a slight hill that tapers into a tree-lined ditch which runs parallel to this street. The sumac in front of the trees has wild berry bushes that have exploded all around the feet of the sumac in wild pricker limbs. The sumac  grows taller than the house now. Beyond that impenetrable barrier (animals that cross through make little tunnels under the tangles) is where I saw an owl in one of the trees which are undressed right now on account of it being winter and they’ve shed all their leaves.

I’ve seen eagles fly over, bluejays with strong personalities, redheaded woodpeckers, crows on garbage days of course, mourning doves, starlings, robins, hawks… and occasionally a turkey family trotting through as well as other birds. But somehow an owl sighting in the middle of the day seems special. I don’t know why. I suppose because I don’t see them often.

Since the trees are barenaked, my eyes were drawn to the squat shape on a limb. Brown mixed with black, white and tan, it caught my attention and my first thought was that it was a hawk but I saw ears or tufts on its head. I stood a long time watching, but it would not turn my way. It wasn’t facing me. It was turning its head this way and that, on the lookout for mice I’m guessing. It never did turn around. The owl looked similar to this one: 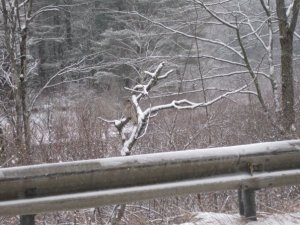 Al and I were headed to Vermont one weekend when he pulled over and snapped this picture of an owl he spotted by the side of the road. Don’t see it? Here’s a close-up. 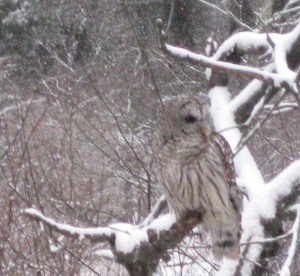 They signify wisdom, right? So what does it mean if the wise owl won’t turn and face you? So anyway, I was in Target the day after the backyard-backwards-facing-owl-sighting, when I happened upon a whole parliament of owls. (Yes, a group of them is called a parliament.) They’re a big decorating “thing” right now apparently. Owl doormats, figurines, cookie jars, salt and pepper shakers, throw pillows, candles… I wanted to think that noticing owls meant something but the meaning is lost on me.

It’s like the word catawampus. Have you ever heard that word? I’ve heard the word twice within two days. Mind you, I’m an avid knowledge gatherer/reader and I can’t say as I’ve come across that word before now and here I am finding it in a book that I’m reading and then the delightful whimsical little word “catawampus” is used on television the following day. It means: a situation that’s gone out of control, or something that’s askew.

The world’s gone catawampus as of late, eh? Or has it always been that way? There was an earthquake here in Connecticut the morning I went to the doctor. They had a TV on in the corner of the waiting room, as most places do these days. It was showing the morning news program. There’s been a bitter cold snap going on and the newscaster reminded viewers to keep their kids warm. A weary looking man who’d been walking towards the exit door paused and turned to face the room when he heard that.

“Really?” he said, with his palms up in the air, “Did they just remind people to keep kids warm? Isn’t that a given? Why would people need to be reminded of that?” He harrumphed and promptly exited the building. As I sat there I thought,

sadly some people do need a reminder. Look how many people forgot their kids in hot cars this past summer…

This is why my mind is so catawampus. You see, it’s because the world around us is. I was chatting to my grandson the other day, who is seven years old (and 10 months) when he said to me,

“You’re my sidekick. I get a kick out of you and you have a good side. But you sure change the subject all the time when we talk.”

I replied the only way I could. I said, “My mind is a pinball machine. The trick is I can’t let it tilt, you see.”

Bad analogy. I don’t think he knew what a pinball machine was. So I changed the subject. We looked up animal scat online so during the warmer weather if we go on walks we can spot the difference between squirrel, skunk and coyote poops. The coyotes were howling big time a few nights ago, from the woods across the street from me where there are caves. I don’t know how many coyotes there are. I’ve heard that two coyotes can sound like seven or eight… We see them from time to time as well as foxes and sometimes an occasional bear travels through, or so people say. I’ve yet to see one, although I’d like to. My father sees them all the time in Vermont. In his backyard. By the side of the road.

Once, he was driving his pickup down a road when he caught sight of a black bear lumbering out of the woods at full speed ahead. It promptly made contact THUMP with the back of his moving truck! He slowed to watch the spectacle in his mirror. The bear, obviously stunned, shook its big ol’ head a few times (like those characters who get hit with frying pans in cartoons) and then off it went into the woods.

Anyway as my grandson was leaving to go home, I said “Bye sidekick.” He paused and said, “No no Grandma. You’ve got it backwards. You’re the sidekick. I’m the main guy.”

Somewhere in the world there is a light bulb that’s been burning for 110 years and no one knows why. Elsewhere the mummy Hatshepsut has a frozen-in-time smile. Or is she grimacing? It looks like a smile. They say if you pin an oak leaf over your heart you’ll be protected from lies and deceit.

In other news (bear with me, I rack up points by pinging my silver thoughts all over my brain like the inside of the pinball machine as I mentioned. It’s when your flippers are idle you lose the thought entirely):

I finally designed a book cover I can live with! 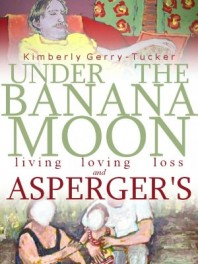 It had two of my paintings on the cover, and although I liked the cover well enough, I didn’t have much input as to its design. My book won’t be back online for another week or two but after much thought I’ve decided on a cover. First, I was going to go with this:

And then I had a thought. I decided I wanted my parents on the cover. I used an old Coney Island photo and created the following book cover and so it’s settled. This is the final cover at last: 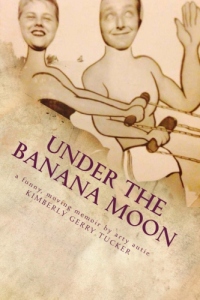 What do you think of my final decision?

As I said in my last blog, I was going to ask for your help with a project I’m working on. And so I am having a call for submissions. My newest book is called:

I am compiling essays between 500 to 1000 words (or more), written by mentors, parents, teachers, or professionals who mentor, teach, support and inspire autistic persons (either adults or children) to create art, participate in movement therapy, dance as an expression, or participate in music programs or drama.

I want a personal account of how working with an autist as a support person has changed the autist’s life but also how it has changed your own?

What inspired you to mentor an autistic person in the area of the arts?

The idea is to inspire other people to start up similar Arts programs in their own communities or to give parents ideas how to nurture autist artists’ talents in their own homes. Interspersed in your essay, I am hoping you can give 5 or more “tips” for future mentors. Not everyone knows how to start up an Arts program.

What worked for you?

What were the hurdles and how did you overcome them?

I’ll be selecting some images of artwork for the book (by people either children or adults on the spectrum), as well as one painting that I’ll choose for the cover of the book. The images should be over 300 dpi, and of high quality.

I know firsthand the benefits of having a support system. My earlier paintings would be gathering dust and eaten by moths in my closet if it were not for Allison inspiring me to show them. Now I show regularly at a few galleries every year. If it were not for Barb instilling in me that I could use my art to spread my wings, I would never have painted those two murals in 2006. The work (which paid well,) supplied Christmas for my children the year after my husband died.

Don’t hesitate to email me at gnightelizabeth@gmail.com if you think you’d like to submit something for my new book. Communication impairment takes things from you. Finding a way to express yourself gives meaning to your life.

“I didn’t want to tell the tree or weed what it was. I wanted it to tell me something and through me express its meaning in nature.”  Wynn Bullock

I’ve used the word catawampus seven times in this essay!