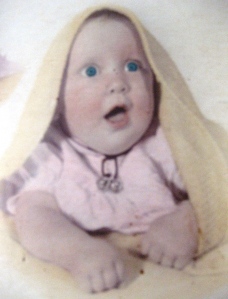 me, what a looker!

my mother and I, She kept the bathing suit. I still have it, (the red and white striped bikini) —the elastic is shot but I still have it. Matter of fact, I think, 49 yrs. later, my father still has that brown shirt blowing on the line! I’m not kidding. My mother is an urn now. I guess you could say “I” “kept” her. My father handed her to me. I couldn’t say NO. See URNS blog…

My family, the three of us, ( my parents and I) were a little unconventional, or so I thought. As it turns out, there were lots of other autistic/selective mutes in the world. I just didn’t know it. There were kids who lived in hoarder’s houses elsewhere. I just didn’t know that at the time. A child doesn’t come into the world knowing that stuff.

Here’s a misunderstanding I had growing up: I thought all kids came from loving homes, and I had no knowledge that at least a few of the kids in my class were possibly bullied by the worst kinds of terrorists in their very own (safe?) home zones: by their very own parents. Mine were loving. I was lucky. I just didn’t know that at the time.

One day a boy who liked me asked to come home on the bus with me and visit for the afternoon. I was in Kindergarten. I kept putting it off but eventually the parents got together and it happened.

That morning I surveyed the kitchen and wondered what B___ (I’m not using his real name.) would think of the metal cabinet with the sliding glass doors filled with so much stuff you couldn’t open those doors or there’d be an avalanche. Forgotten Pistachios in a dish inside there, once tumbled out, worms inside the shells, twisting and surprising me. How I wished at least, that the doors were solid, and that would’ve hidden some of the stuff. I wondered about B____ seeing the piles when he visited me. We didn’t take visitors much, except for cousins and one friend who lived nearby. My mother socialized outside the home, didn’t invite too many people into our private world.

We ate food on our laps or on TV trays. The table was a a cache for all things, for whatnots and saved goodies like butter tubs we could reuse, stacks of groceries with nowhere to store them because cupboards and cabinets held empty light bulb boxes and plastic bags filled with hair curlers and and… you get the idea.

I asked my mother, (who was a devoted woman, always clean, we had good meals, clean clothes and dishes, and she took pride in her appearance when she went to work and ladies’ parties and pride in my appearance too. She was nursing a very bad heart defect at this time. We just didn’t know it yet. She was very tired.)

She said she would!

Later that afternoon, this wide eyed dark haired smiling little boy (B___) followed me into the house, saying, “Let’s play in your room OK!?”

I saw his face drop. It’s true. His features just fell. His eyes, which had been squinted with his smile, they just widened as he surveyed the room. Exactly as I’d left it that morning. Almost exactly.

“Let’s play outside!” I said, and he walked out the door from which he’d come. Before I followed him outdoors, I turned to my mother, “I thought you promised to clean stuff?”

She pointed to the big metal cabinet that almost took up a whole wall. There it was:

not even a foot wide but I could SEE the shelf in front of the cabinet. I could see a space! I could actually place a cup on it, if I felt so bold! I decided maybe I’d do just that later. I was so proud of her. She kept her promise. I knew how hard it must have been to part with “stuff.”

At Christmas we had a fake tree, which I hated. I always debated even at a wee age, “Which is worse? Chopping trees all over God’s creation only to have them end up in landfills? For what? Or were fake trees worse? Cluttering landfills with plastic that would never biodegrade? I knew about clutter well enough. Always preoccupied with world problems like cruelty, overpopulation, and the tree dilemma, I usually came down on the side of REAL trees. I liked the scent. I still love trees, obsessed with them really.

We had a fake one, with endless branches my father had to insert into just the right places. He had enormous patience for untangling Christmas tree lights (which apparently we put away each year in tangles!) and patience for putting together the fake tree. If a branch got placed into the wrong slot, then the center of the tree could have a small branch and the topmost part could have a long branch. These things made my father and I laugh. He rarely lost his patience. How much serotonin he must have! We worked together until we got the tree right! One year, the year B___ visited -that one time (he never visited again) we set up the tree too close to the heat vent. The back branches melted. Keeled right over.What a sight! Still, we kept the tree for years and used it anyway. We didn’t throw things away. There was no away.

(this is not our actual TV, ours would have had lots more STUFF on top. This is an image I pulled offline that looks like ours did.)

One summer, as was typical, we still had the paper Rudolph and Reindeer complete with sleigh and jolly faced Santa affixed to a bare spot on the living room wall. It was too hot to play outside. My cousin and I lay on the lineoleum, hands under our chins, watching a black and white kids’ show. We didn’t get cable, gosh no. Not even PBS. I didn’t watch a genuine Sesame Street episode until I was at least 12. Kids’ shows weren’t pushed down your throat in those days through overmarketing and they didn’t monopolize kids’ meals with their toys and plaster TV images all over everything. (the early 70s.)

First we heard a tiny pop. Still we kept watching. Then we heard fizzle/snaps and crackling. We looked at each other, my cousin and I when we saw the smoke. There was a big POP!

“Um, Mommy, the TV is on fire!” I called, hands still holding my head up; body sprawled out on the floor with the lineoleum that had black places I could not step on. How OCD I was, eh? But laying on the black places was OK.

I put a lot of stuff, my own hoarded memories, if you will, into a book called Under the Banana Moon. Sometimes I wonder why I write, and I realize maybe it’s because I can’t stop. Every single childhood is unconventional in some way because conventional cannot be rationally defined. Today I realized why I wrote the book.

A woman wrote to me (who was reading my book) and had this to say:

“Love it so far! I have been depressed for a long time but reading this I’ve had some energy and a little happiness.”

That’s the best reason to write that I can think of, so bear with me. I am going to continue doing so. Really, I can’t stop.

Hey, I still have a baggie somewhere filled with my mother’s old grey hair curlers. Her hair is caught in them. Is that weird?