“She has double-u’s all over her,” said my two and a 1/2 year old granddaughter.

“What? Minnie the dog has ‘W’s” all over her? Really?” I replied to her, laughing. At first I thought that this was a form of Onomatopeia (which is Greek for making up words to explain noise; but in this case she was making up a word for something visual.) They did that in Batman movies: Boom! Hiss! Zap! But no, it couldn’t be a visual Onomatopeia (if that exists). Perhaps she’d been watching too many cartoons!

W’s on my dog. Indeed. Silly nonsense, right? I don’t know. Nonsense, like fiction, is rooted in fact.

I repeated the W comment to a friend and she remarked that this little girl may be a synesthete, (another Greek term for an involuntary neurological phenomenon whereby people see numerical sequences, dates, colors and patterns when looking at something). It was an interesting theory but I came to believe that maybe she’s just got a case of

Studying my dog yesterday, I had an ‘aha’ moment. Look here:

There, by her nose, do you see the W? Ah, the picture is blurry; but it’s there.

Here’s an odd overhead angle of the dog’s wrinkles. I suppose those lines there could be the letter W, right? She’s part bulldog after all. 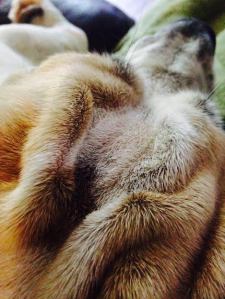 It’s a matter of expression. Of perceiving and then expressing. Speaking of perception- I saw two very different movies recently: ‘The Monuments Men’ (about the Nazi Brigade who confiscated and also destroyed works of art during World War Two) and ‘Philomena’ (about nuns, unwed mothers and adoption). Of course, I researched the topics afterwards.. and found that a lot of the facts are rearranged but I’m not complaining because I like films like this; films like Lincoln and The King’s Speech.  So this is where perception comes in:

It’s most often the case that the person with whom I watch movies tends to laugh at different moments than myself. I like nuance, subtlety, hidden innuendo and I appreciate that. I often don’t laugh at the places where I’m “expected” to laugh. I don’t know why this is so. For example, in The Monuments Men, I thought the smoking references were hysterical. In particular, a doctor is seen examining a patient. The patient is smoking and coughing right there in the exam room. The doctor himself is smoking as he uses the stethoscope!

But I don’t want to expound on that (nor do I want to talk about the inaccuracies I found because for the most part the movies were well done) or I’d have to issue SPOILER ALERTS and I don’t want to do that. I’m just bringing up the fact that two people can watch the same thing, and their perceptions can be entirely different.

My reaction to seeing a flickering flame, may not be the same as the horrifed reaction from a person who survived a burning building. This is where PTS (post-traumatic stress) comes in. As unique individuals making our way in the world, that which we perceive is processed and made sense of, differently from person to person. These individual responses could be based on our life experiences, our frame of references that we have stored in our minds, our creative tendencies, our  general knowledge of subjects and perhaps on hundreds of things. Every single person is unique unto themselves. Genetic components come into play in shaping who we are, but the neural imprints of those first three years or so of our lives play a crucial role in determining who we become. These images are from a marketing site (link below this blog) which has a few interesting diagrams about perception:

QUOTE: “I maintain that the human mystery is incredibly demeaned by scientific reductionism, with its claim in promissory materialism to account eventually for all of the spiritual world in terms of patterns of neuronal activity. This belief must be classed as a superstition. … We have to recognize that we are spiritual beings with souls existing in a spiritual world as well as material beings with bodies and brains existing in a material world.”

— Sir John C. Eccles (Nobel Prize winner and author of “How The Self Controls Its Brain”)

The next time you see a movie, read a book, watch TV, or observe nature, children or animals, keep in mind that there are two meanings to the word perception.

One: becoming aware; realizing or understanding something.

Two: interpreting, regarding it

There is a “test” by Myers-Briggs (link below) to understanding what your personality is. This test costs money so I wouldn’t be inclined to take it anytime soon, but it’s interesting. Example: are you an analyzer? A protector? A conceptualizer? A quote from a Myers-Briggs site:

Everyone takes in information some of the time. Everyone makes decisions some of the time. However, when it comes to dealing with the outer world, people who tend to focus on making decisions have a preference for Judging because they tend to like things decided. People who tend to focus on taking in information prefer Perceiving because they stay open to a final decision in order to get more information.” 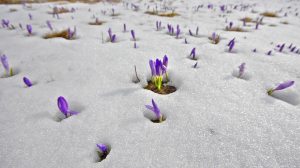 Picture this: It’s Spring. It’s been a long Winter and you’ve got the first cookout of the year planned. It SNOWS. When it snows in Spring, people sigh and complain; anxious for winter to be over with…Did you know that snowfall in early Spring was once called “poor man’s manure?” It provides the soil with nutrients and is a better source of moisture because it doesn’t promote erosion. I guess it’s all in how you perceive things…

I will always see W’s on bulldogs now.

You must try the following experiment, and then come back to the second link here and try that experiment afterwards. You must watch the first video before trying the second one for accurate results. http://www.theinvisiblegorilla.com/gorilla_experiment.html

Now watch this video: An experiment in perception for people who have already seen the above video- and expect to see an invisible gorilla: http://io9.com/5585219/the-invisible-gorilla-returns-to-show-us-how-often-we-miss-the-obvious

Logic and Emotion by Digital: http://darmano.typepad.com/logic_emotion/2008/10/perception-pyra.html