I love this so-called weed. Don’t go there. This blog is not about that kind of weed. I mean an actual weed. It’s roots smell like carrots. It’s leaves smell like parsley. When seeds form, the flower is a balled up nest. Its white cluster of flowers  form an umbrella. It’s the white Queen Anne’s Lace. Although it can be tinged pink or green. Most of the flowers, not all of them but most of them, have a tiny dark or light purple or pink flower in the middle of the white flower face. The flower itself is shaped like an umbrella composed of miniscule flowerettes that radiate out in a starburst pattern or the ‘umbel’ as it is called. Queen Anne’s Lace is intricate and lacelike. I was wondering; just how big can this flower (weed?) grow? Researching that curiosity (I have so many of them), I came across an toxic, intrusive, hefty and “dangerous”…can cause blindness, etc… invasive plant called Giant Hogweed which is masquerading as Queen Anne’s Lace but considerably taller! Here it is: 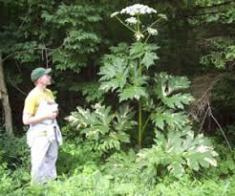 giant hogweed (note: Who took this pic? I would like to give credit here)

I got to thinking, how many times do I mistake one thing for another? The reason I began searching for a giant image of Giant Queen Anne’s Lace to begin with; is because:

1. I read about a woman coming across a Queen Anne’s Lace Umbel two feet across and she took shelter under it in a rainstorm. The stem was eight feet high! Granted it was a fiction novel, but every fiction writer mines their ideas from truth at least in part, so I thought, ‘I must see if there is truth to this, as I suspect there is not.’

But back to “mistaking one thing for another…” I think it’s entirely possible this author saw Giant Hogweed and thought it was Queen Anne’s Lace and wrote about it. Mystery solved as far as I’m concerned. I understand Hogweed is a scourge in Britain and New York too. Naughty Hogweed. Sometimes you search for one thing and the results you get are entirely different from what you think you’re going to get. But that’s okay. The brain is neuroplastic and it is entirely capable and even pleased to be surprised every once in awhile.

I remember going through a hard time about 8 years ago. All three of my children lived at home then (aged 26, 17 and 12) and my husband had been dead a few years. I was feeling like no one was hearing me and I had no direction. We were all grieving. Sometimes we went our own way with that and sometimes we collapsed together. On this particular day, the sink was overflowing with my collection of dollar store bowls and chipped plates with hardened-on food. I wasn’t getting a lot of teamwork around the house and I was headed for a meltdown. Calmly, I threw a bowl on the floor. I liked the sound so I smashed another. When I realized the calming effect it had on me, I continued until all the cheap bowls and plates were destroyed then I swept up the mess and took out the trash. felt good.

I was reading Harlan Ellison’s “Gentleman Junkie” short story fiction collection the other day when I came across this line: “I flashed on the simple truth that you can change your life, if you make a sudden violent commitment without stopping to rationalize why you shouldn’t.” The character in the book, Harlan himself in the Foreword, says this, just before he smashes stacks of expensive Rosenthal plates valued at 100 dollars each and embarks on a new path in life.

Giant Hogweed or Queen Anne’s Lace. Dollar Store Bowls or Rosenthal plates. My new path in life literally took me along many Vermont roadsides with knee high weeds, many I picked for my mother; many were Q A L (Queen Anne’s Lace).

I enjoyed the fictional story of the woman taking shelter under the umbrella of Queen Anne’s Lace, even though I’ve no facts at this point to support their great height and berth. In my mind’s eye it does exist at great height and width, and Giant Hogweed does not! As for Harlan and me, we both chose similar stress releases, both methods worked. Because he was right, my life did change, I did know it was changing and the sound of the breaking bowls marked that somehow.

If anyone does try growing Q A L from seed, maybe putting a little Miracle Grow on it, and you get stupendous results, let me know!