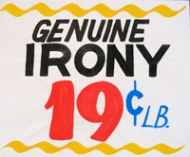 This poster is an example of some unusual art I came across quite by happy accident some years ago. The Empty Set Project Space was active sporadically as a gallery between 2001 and 2008. It is “dedicated to exhibiting new works by emerging artists in all media and is currently in cryogenic stasis.” The space has housed the studios of such artists as Monika Pizzichemi and Michael McKay. They are located at 150 South St. 2nd floor Pittsfield Ma 01201 (on the corner of South St. (Rte. 7) and West Housatonic St., across the street from the Colonial Theater).

I don’t travel much, but when I do, I head to Massachusetts and Vermont. My father lives in Vermont. Idling at a stoplight, from my view in the passenger seat, I look up and see The Empty Set Project signs…Crafted purposely to look like the old hand-painted grocery store posters of yesteryear, SEE ABOVE with witticisms that are simplistic but make you think. Upon first glance they do seem like store signs but when you really look (I’ve been looking forward to their new posters for years and they change them regularly, it’s always amusing and intriguing) that’s when you notice the ‘odd’ things for sale. But I have to show you more for you to understand…Keep in mind these windows are up a few floors so you have to look up to notice them. I think that’s the point. Really look at the world. That’s the only way. 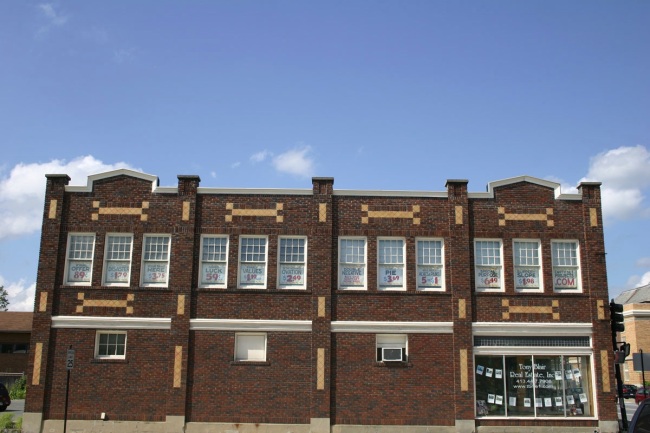 Is that innovative? I love things like this. I love the brains and the artistic mentality of these things. It’s like seeing a bit of magic in the everyday.

There is real ‘magic’ in the world and it’s worth finding because it makes you happy. To me technology is a form of magic. Take “magic mirrors” for instance. They’re installed in at least three stores as of this writing and may be the shopping experience of our futures. NY, Milan and Madrid have them. The mirror films you and in a delayed motion makes you see 360° the outfit you are trying on. You just turn your back, then turn again and you see in front of you an image of your back, so you can actually see how the clothes look from all angles! 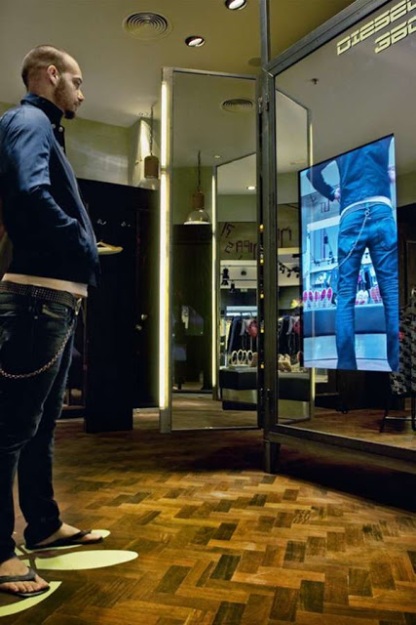 I can remember in sixth grade when the teacher asked us all to draw pictures of what we imagined “The Year 2000” would look like. It  was 1976 then— and we all enunciated the phrase “The Year 2000” with a mystical lilt to our voices. It seemed a far off time! As for what the class envisioned for the future? There were a lot of cars drawn that could hover and get along without touching the ground. There were pictures of “Jetson-like” kitchens, where you pushed a button and food appeared. And we drew robots. Some of us, me included, envisioned magic phones! You could call someone up in the usual way but here’s the magic: YOU could see THEM and THEY could see YOU as you talked!

Well that’s a commonplace thing now, isn’t it? I will never stop being in awe of this sort of thing. I can do without the constant selfie fixation. yesterday I was riding in the car, and a woman was walking beside her boyfriend, pocketbook (designer?) strewn over her shoulder…and she had the cell phone held out in front of her as they approached the crosswalk. Look at me Facebook! Selfie time: I’m walking down the street right now! Everywhere I look people are mugging, selfie selfie selfie time!

I’m not bashing it, it greatly amuses me. It’s human nature. As long as people are actively involved, living IN the present, instead of documenting images of what they do as an obsession, then what’s the harm? Cell phones ARE amazing. My 1976 class assignment come true. I’ll never take it for granted and nor will I forget to be in awe. Trees are more awesome than cell phones however by far! Back on subject, I am reminded of Kurt Vonnegut Jr. who, in the 60s, wrote a short story in his Cat’s Cradle collection about people who had robot nannies. They were ideal in every way, and were especially devoted to the little ones they cared for, so much so they started meeting secretly with each out back after their families had gone to sleep. There, they would actually battle! The families were wondering why every morning their nanny had scrapes, dents, and were in need of repair! So many times, the Science Fiction that is written or the outlandish things we imagine (hovercrafts? picture phones?) actually come true! Remember those programs in the 90s about actual battling robots? I do!

Don’t ever think your ideas are silly. In a complicated world where just getting through the day seems Sisysphean, a little nonsense is welcome. It wakes the brain cells, as Dr. Suess would say.

(A Sisysphean task: A cruel king of Corinth condemned forever to roll a huge stone up a hill in Hades only to have it roll down again on nearing the top… Yeah life does seem like that sometimes. )

Remember, (and the following is a line from an old favorite movie of mine: Angels In The Outfield):

We all need angels in our outfields.

Kim, author of Under The Banana Moon (If you want to read more of my writing, get my book. It’s affordable and makes a good Christmas gift, besides I want you to come back to my blog and tell me what you really think of it.  http://www.amazon.com/Under-Banana-Moon-Living-Aspergers/dp/1469985144/ref=tmm_pap_title_0