Fluid flexible cats pour their physical selves into small spaces. Like my Po: 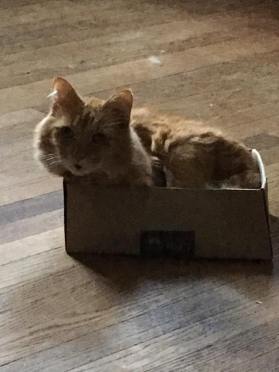 Malleable mice effortlessly squeeze through crevices. Surprisingly wily squirrels can chew snake skins into paste, embed it into their fur and throw predators off their scent. Traits, adaptations, survival mechanisms are built into all living things. For all action, a reaction, a consequence, a result. Trees send messages to other trees, warning of disease, infestation, pests.  A ‘mere’ weasel can unintentionally ruin the Hadron collider.

If my brain were a junk drawer, should the old adage apply?— Hold it.

If you don’t love it,

need it or have a

I hold ideas, thoughts and facts and love them.  I happen to share them too. Sometimes.

Presently I’m reading Dogtown by Elyssa East, and I came across a passage (7 words) that are as simplistic as they are a reminder to stop and smell the roses so to speak:

“Sit on it and feel the energy.”

Backstory. Dogtown is an abandoned inland settlement on Cape Ann in Massachusetts. Abandoned homestead foundations with stories to tell; if they could, dot the area. Boulders are carved there like this:

They were commissioned to be carved by millionaire (misguided) Roger Babson. So many people were inspired by the place in myriad ways.

Some people feel an unusual but definitive sort of energy there. Not because of the carvings; they’re quite beside the point. By the place itself.

Poet Charles Olsen was inspired by the mysterious Dogtown (rife with history, mystery and murder too) to write his highly acclaimed Maximus Poems.

When a former student (Charles Boer) came to visit him, Olsen took him to a big (I carved) rock in Gloucester’s village of Magnolia and the poet said to his student Boer:

“Sit on it and feel the energy.”

Boer later recollected, “I felt nothing but a cold pointed stone sticking me in the ass.”

And it’s possible Boer the student might’ve thought…a cat is just a cat. A mouse is a mouse. A tree is a dumb tree. This perhaps defines why the poet Olsen was the teacher. Coming across this passage I was reminded of Buddhist teachings.Perhaps you’ve heard this one:

A university professor went to visit a famous Zen master. While the master quietly served tea, the professor talked about Zen. The master poured the visitor’s cup to the brim, and then kept pouring. The professor watched the overflowing cup until he could no longer restrain himself. “It’s overfull! No more will go in!” the professor blurted. “You are like this cup,” the master replied, “How can I show you Zen unless you first empty your cup.”

At the risk of sounding too triply: Maybe the student was so far from empty that he could never feel or fill or learn.

In the Maximus Poems, Olsen calls a Dogtown boulder a “bald jaw of stone.” He felt those rocks as he’d encouraged others to do- before he could write so lyrically about them,

and this brings to mind Marsden Hartley, a renowned artist who was inspired to paint Dogtown’s rocks, a person who also felt something unusual and beckoning about the landscape before he could render it in art. Here is one of the paintings:

Remembering to empty the cup now and again is like the purging I mentioned, the idea that to declutter, we have to reassess. Do we need it, love it, have a use for it? I have no problem feeling stones, in fact they’re everywhere in this house: there’s a heavy slab in the linen closet just now. There are weighty rocks foraged from a Massachusetts creekbed along the front of the house. There are vials here and there with crushed mica bits on shelves, in basement boxes… In my mosaiced jewelry box , the velvet lined drawers contain various collected pebbles; some glint, some are flecked, some seem ordinary. An interestingly shaped quartz relic sits purposefully here in the living room near a statue on the floor. I have to empty my pockets of rocks when I do laundry. In fact when my neighbor moved in across the street over 10 years ago I knew I’d like her right away. Both her bedroom and my own have windows accosted by a streetlight and an electrical transformer. She looked up and said to me,

“I’m going to have to put crystals on that windowsill. You do the same, don’t you? Because you should.”

In fact yes. I did have crystals on that windowsill at the very moment she suggested it. To this day I still do. Of course I have bits of cinnamon sticks above door frames too…….

The fluid animals that pour themselves into small spaces, fill niches with themselves are not me.

Not being a cat, mouse or even a weasel, I have always dug my own niches to fit into. I’ve had to dig, carve, form, burrow out, MAKE my niches.

That is not a fluid activity; nor is it easy—–so when opportunities began to come my way this month,

I forgot to empty my cup beforehand.

Don’t forget to smell roses and feel the energy. Not only in rocks, but everywhere. Rethink your think. If something is “sticking you in the ass” find a different perspective. Chill. Smell the rocks. Works for me.

P.S. My friend Jane mentioned, “perhaps I’m missing something. Why impose human concepts into those stones?”

I agree this was my reaction too. The businessman who paid to have these sentinels of time defaced, has now imposed his own ethics upon generations to come in these carvings and that’s just self serving. The interesting thing about this place is that it moved so many people to do things like this because of some weird vibe it has: inspiring some to paint, to write, to deface the place and even to murder. It’s that unnameable feeling I’m talking about here. The sense of place that inspires action of some kind.

I would not take the inscriptions to heart because they come from a selfish businessman millionaire with his personal moral agenda but the art and writing, that I can relate to.

2 thoughts on “Stop and smell the rocks”

Art by KIMBERLYGERRYTUCKER
This shelf was installed to put Al’s starter vegetable trays in the spring but Simon had other plans.